McKenzie tops Greenville, Lanier in 7-on-7 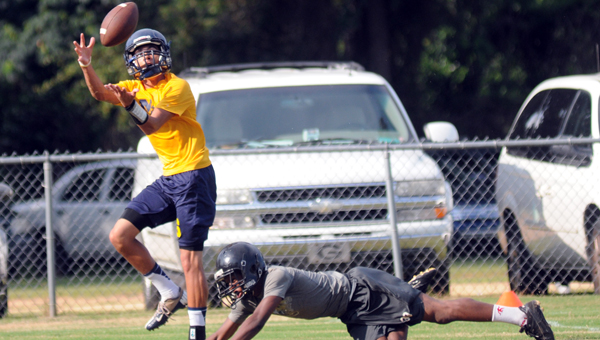 McKenzie School head coach Josh McLendon’s challenge to his team prior to the start of Tuesday’s 7-on-7 contest at Greenville High School was simple.

“I told them to compete no matter who was lined up across from them,” the first-year head coach said.

The Class 1A Tigers heard McLendon’s message loud and clear.

McKenzie scored wins over Class 5A Greenville’s second string and Class 6A Sidney Lanier High School before falling to Class 4A Hillcrest of Evergreen.

“I thought we played real well at the beginning,” McLendon said. “Being a 1A school we don’t have the numbers of the bigger schools, so we have a lot of guys that are playing on both sides of the ball. The fresher we are, the better we are. There at the end we just kind of got worn down, but I was proud of the way our guys competed and didn’t back down.”

And while McLendon is proud of the Tigers’ 2-1 mark, he said he and his team didn’t enter the day looking to score 7-on-7 wins.

“We’re lucky enough to have some really good skill players,” McLendon said. “We have four good wide receivers that I think can play at any level, and a quarterback and running back that are the same way. I was really pleased with the way Terrance threw the ball and his decision making, and I thought Ty played really well. Moving him from running back to wide receiver is pretty new. It’s something we just did in the last couple of weeks, and it looks like he’s really adjusting well.

“I was pleased with how we played. We’ve still got a lot of work to do, but we’re getting better, and we’re going to keep getting after it.”

The Tigers will open fall practice on Monday. They kick off their 2013 campaign Aug. 30 on the road against Highland Home High School.