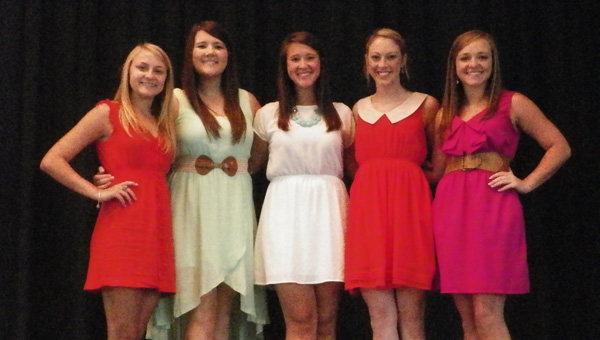 Five local girls will compete for the title of Crenshaw County’s Distinguished Young Woman this weekend.

Categories for the event include interview, fitness, talent, self-expression and scholastics.

Allison is a senior at Luverne High School and is the daughter of Martha Anne and Ward Allison.

She serves as a Crenshaw County Chamber of Commerce Belle; is a dancer and instructor at The Dance Center; and is a member of the Student Government Association, Brothers and Sisters in Christ, National Honor Society and Mu Alpha Theta.

Her talent will be a lyrical dance to “Keep Holding On” by the “Glee” cast.

After graduation, she plans to attend Auburn University and major in nursing.

Jones is a senior at LHS and the daughter of Billy and Cindy Jones.

She has been a dancer at The Dance Center for 14 years; serves as LHS varsity cheerleader co-captain, Crenshaw County Chamber of Commerce belle, SGA treasurer; is a member of Brothers and Sisters in Christ, National Honor Society, Mu Alpha Theta, Math Honor Society and Health Occupations Students of America.

Her talent will be a vocal to “Part of Your World” from “The Little Mermaid.”

After graduation, Jones plans to attend Troy University and major in biomedical sciences, and then enroll in medical school at the University of Alabama at Birmingham to become an ER/trauma doctor.

Newton is a senior at Crenshaw Christian Academy and is the daughter of Steve and Brenda Newton.

She serves as president of the SGA; is a member of the Interact Club, CCA choir, varsity cheerleader, 12-year member of The Dance Center, CCA math team, Fellowship of Christian Athletes and French Club.

Newton’s talent will be a jazz dance to the Glee version of “River Deep, Mountain High.”

She plans to attend Auburn University and major in pre-pharmacy.

Taylor is a senior at LHS and is the daughter of Danny and Angie Taylor.

She is a dancer at The Dance Center; serves as LHS varsity cheerleader captain, Crenshaw County Chamber of Commerce belle; a member of the SGA, Brothers and Sisters in Christ, National Honor Society and Mu Alpha Theta.

Taylor’s talent will be a jazz dance to “The Way You Make Me Feel” by Michael Jackson.

She plans to attend Troy University and major in nursing with a specialization in neonatal care.

Tranum is a senior at CCA and is the daughter or Russ and Josie Tranum.

She serves as vice president of the SGA; is a member of Interact, varsity cheerleader, basketball player, softball player, FCA member and French Club member.

Tranum’s talent will be a monologue titled “The Ugly Step Sister Speaks Out” from “The Cinderella Story.”

She plans to attend the University of Alabama at Birmingham to major in neonatal nursing.