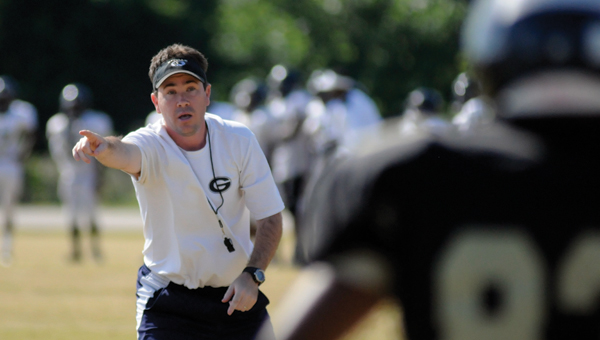 There will soon be a new top Tiger in McKenzie.

Greenville High School assistant coach Josh McLendon has been tapped to replace Miles Brown as head football coach at McKenzie School. The move is expected to be approved by the Butler County Board of Education at its Thursday meeting.

Brown, who was recently named assistant principal at McKenzie, spearheaded the search for his replacement, and said McLendon’s name continuously came up during conversations with other coaches.

“Just about every time I asked someone who they would recommend as the next coach at McKenzie, his name came up,” Brown said. “It just kept coming up. I didn’t really know him, but I knew of him from his time over in Greenville. Once we sat down and talked, I knew he was our guy. He’s got a lot of energy and he’s a guy that’s got great work ethic. He’s a blue collar guy that’s going to come to work and make our program better every single day.”

“Every since I got into coaching it’s been my goal to be a head coach,” McLendon said. “It’s tough to leave the Greenville program. I have a lot of relationships with the players and other coaches, but this is a great opportunity for my family and me, and I couldn’t be happier to be a part of the McKenzie program.”

McLendon met the team on Monday night just after Brown informed his players that he would no longer be the school’s head football coach due to his promotion to assistant principal.

Brown said the meeting was an emotional one for him and the players.

“There were some heavy heads when I made the announcement,” Brown said. “I understand that. I’ve been there a long time, and I have a great relationship with the kids, but I explained to them that this was an opportunity I had to take for my family and myself. I made sure they understood that I’m not leaving McKenzie. I’m just changing roles and I’ll be their No. 1 advocate and biggest fan.”

Brown said that during the meeting, his son William Brown, a freshman quarterback, voiced his support of the team’s new coach.

“He stood up and told the guys that he didn’t care who the coach was as long as he wanted to win championships and work toward that every day,” Brown said. “I was proud of him for that, and I know the rest of the team feels the same way.”

Brown said that while he will remain at the school, he will be stepping away from the football program to allow McLendon to put his stamp on the Tigers.

“I told Josh that I’m not coming to workouts or practice, and I’ll be in the stands for the games,” Brown said. “It’s his ship now. He needs to make it his, and I’ll support him in doing that. The football team is his job and responsibility now. Mine is the whole school, and I’m excited about that.”

McLendon said the on-the-field changes may not be immediately apparent since his approach to the game and running a program is similar to that of Brown, who in seven years as head coach led the Tigers to a 47-27 record, including a pair of 10-win seasons in 2009 and 2010, and a region championship in 2010.

“We’re going to do a lot of the same things,” McLendon said. “Offensively and defensively, Coach Brown and I share a lot of the same philosophies. I may add a wrinkle or two, but things are going to be very similar to what the guys have done the last several years. Coach Brown has done a great job building a program at McKenzie. The things they have done here are very impressive, and I just want to try and build on that.”

Brown owns the second most wins at the school behind legendary coach Sam Dour, who led the Tigers to 94 wins during his 26 years at the helm of the McKenzie football program.

“The success we’ve had at McKenzie in the last seven years isn’t because of me,” Brown said. “It’s because of the players and the people that have supported this program. This is a job that can’t be done by one person. It has to be done by a group of people, and in McKenzie there have always been people willing to help make their program successful, and I’ve really appreciated that over the last seven years. Now it’s time to those same folks to get behind Josh and support him. I think he’s going to be a great fit for our program and I’m excited to have him at McKenzie.”

The Butler County Board of Education will hold its regular meeting Thursday at 6 p.m. at which time McLendon is expected to be officially named the school’s head coach.