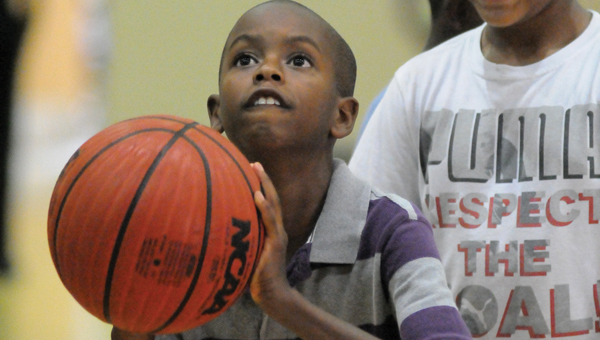 Georgiana School head basketball coach Kirk Norris wants the children at his summer camp to walk out of the gym with the skills they need to be successful on the court.

More than that, though, the coach wants the campers to leave with a love for the game of basketball.

“I want the kids at our camp to take away an enjoyment for the game of basketball, and we hope it will spark an interest in the sport,” Norris said following the first day of the three-day camp.

“Hopefully, this will cause them to want to go out and work on the things they’ve learned at the camp and try to improve.”

This year’s camp, which had approximately 50 attendees between the ages of 8 and 14, focuses on teaching the fundamentals of the game, and then allowing the players to test their newly learned skills through daily competitions and game play including “Gotcha” “Hot shot”, 3-on-3 and 5-on-5 competitions, as well as a free throw contest.

It’s a formula that has proven successful over the years.

Many of the players that make up Georgiana’s varsity roster took part in Norris’ summer basketball camps.

“It’s great to get the kids involved at such an early age and be able to teach them the game of basketball,” Norris said.

“It benefits our program tremendously because a lot of these same kids will be playing for Georgiana. I’d say 90 percent to 95 percent of the kids who have played in the last three or four years at Georgiana have attended our summer youth camp (in the past).”

Several of those players were on hand this week to serve as camp instructors, including former Huntingdon College standout James Daniels and former Georgiana standouts Rickey Everett and Adrian Rich.

Georgiana student assistant Matt Campbell is also assisting with the camp, which is sponsored by Trustmark.

This year marks the sixth straight year that BankTrust has sponsored the camp.