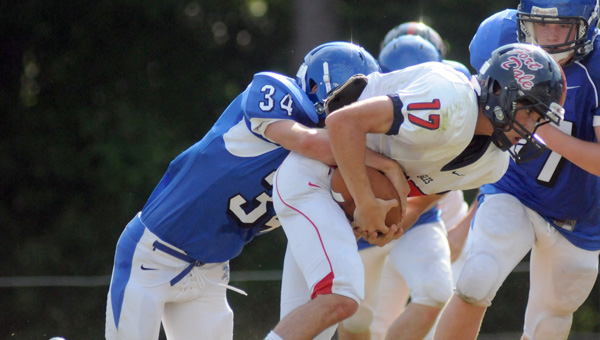 And his football team is probably all the better for it.

Even after a solid showing at the FDA-hosted football jamboree Thursday, Sampley insists that there is still room for improvement.

“I didn’t think we were real sharp, but that’s all right,” Sampley said. “It’s spring training. But that’s a part of what spring is about, getting ready for a successful fall campaign.”

The Eagles will be gearing up for the fall season with a few noticeable vacancies.

There are three returning starters on offense and four on defense. FDA must replace 14 seniors from last year’s roster.

However, filling the void left behind by several players on the offensive line remains the largest focus for Sampley.

“They were all seniors last year except for one of them,” Sampley said. “Of course, we were a pretty good size last year, and we’re kind of small now so that’s going to change the way we have to do a few things.”

But it wasn’t all cautious pessimism for Sampley on the day.

“I saw a good bit of hustle, which is what you’re looking for, but technique-wise we’ve got a lot of work to do,” Sampley added. “But there were some good things. We’ll have to get better at tackling and blocking. Those are the fundamentals that make all of this work. But we’ve got plenty of time to get that way. We’re OK with our progress now.”