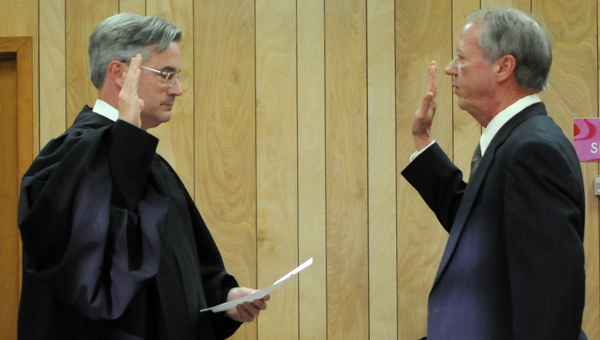 The City of Georgiana is leaving the Butler County District Court system and begining its own municipal court.

The new court, which will cost the city approximately $57,000 a year to operate, will hear infraction and misdemeanor cases originating in Georgiana, while felony cases will be heard by the Second Judicial Circuit Court.

According to Georgiana Mayor Jerome Antone, the city has not had its own court in 40 years.

“We did the research and it showed that we’d do well to have our own court,” he said.

Antone said the city hired a consultant to study the feasibility of a municipal court, and found that by having its own court the city could generate an additional $122,000 a year through court fees and bond fees.

“It’s not all about finances, but that was certainly part of it,” Antone said. “We felt like this was the best thing to do for the city.”

Bush then swore in Beverly Rogers as the court clerk/magistrate.

“I think we have put together a great team,” Antone said.

According to Antone, the municipal court will be in session for the first time on July 7. It will meet in the old Industrial Development building on Ebenezer Road.