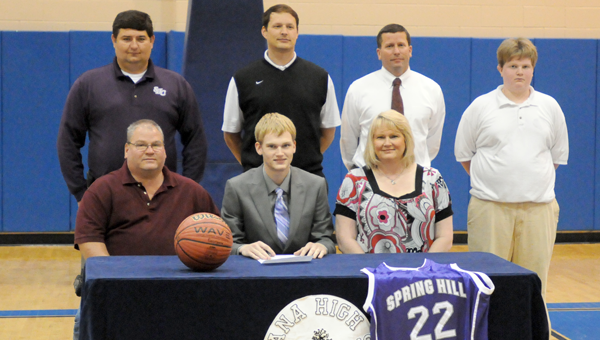 Six years ago, it would have been hard to convince Georgiana School basketball coach Kirk Norris that then-seventh grader Justin Oikle would one day play college basketball.

But on Monday, the coach looked on proudly as Oikle, now a senior, signed to play with Mobile’s Spring Hill College.

“I’ve never seen a kid improve as much as he has,” Norris said. “When he started out in seventh grade he was average at best, but he worked his tail off and became a very good high school basketball player.”

It was that work ethic that led Spring Hill to find a spot on its roster for Oikle, according to assistant coach John Teasley.

“He works hard,” Teasley said. “It didn’t take long to see that. He hustles and he’s not afraid to dive on the floor after the ball. A lot of kids won’t do that. He has grit. That’s something that can’t be coached, so it’s always exciting to find a player like that.”

For Oikle, the opportunity to play basketball at the next level is the realization of a nearly lifelong dream.”

“I’ve always wanted to play college basketball,” he said. “It really is a dream come true.”

Oikle, who also looked at the University of Mobile and Pensacola Christian College, said he knew once he visited Spring Hill that it was the school for him.

“When I went for the workout, I just felt it,” he said. “I liked the college and the coaches. It just felt right.”

It didn’t hurt that the school’s curriculum will also allow Oikle to pursue a degree in electrical engineering.

“I wasn’t going to go to a school that didn’t have an engineering program,” he said.

The level of importance Oikle places on his classroom work also helped sell the Spring Hill coaches on the Georgiana forward.

“He’s a student-athlete,” Teasley said. “We have high academic standards at our school, and we want athletes that place a high level of importance on their studies. We felt like Justin was a perfect fit for our program.”