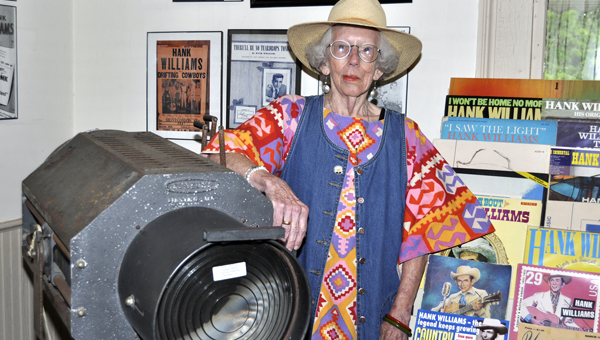 Margaret Gaston shows off a stage light from the Louisiana Hayride from the days when Hank Williams Sr. performed there. A curator at the Hank Williams Boyhood Home & Museum, Gaston is all about promoting Georgiana. (Advocate Staff/Fred Guarino)

Gaston is also the City of Georgiana’s biggest cheerleader.

As one would expect of a museum curator, Gaston is an expert when it comes to Georgiana’s history.

“I am so proud of Georgiana because, see, Georgiana is just a neat little town,” she said.

According to Gaston, Georgiana is a railroad town, and the evidence can still be seen in the city’s downtown.

“If you lived in this area you either worked for the railroad or worked for W. T. Smith’s lumber company,” she said.

Gaston said she has been trying to promote the railroad.

She also talked about the efforts of the late J. C. Sims and his wife, Marilyn, who bought the Ga-Ana Theatre when it was a shell of a building and restored it.

She said if all goes well there will be an original production and play there called “Hiram” about Hank’s Williams Sr.’s years living in his Georgiana home.

“You think ‘To Kill A Mockingbird’ and what it’s done for Monroeville. If they get (‘Hiram’) off the ground, the sky’s the limit,” Gaston said.

Gaston also works to make her city better through her involvement with the Three Arts Club of Georgiana and Chapman.

She said the club makes money by selling programs during the Hank Williams Festival and from a bucket lunch bazaar at Christmas.

Gaston said the club voted recently to give four $1,000 scholarship to seniors graduating in Butler County this year.

The club also voted to give the band director at Georgiana School $500 to defray expenses for travel. The band recently increased in number from five from 72 students, Gaston said.

Gaston said the Three Arts Club came into existence shortly after women got the right to vote.

She joked that she is almost old enough to have been a member back then.

Gaston said her coming to Georgiana was all “serendipitous” as she moved next door to her brother, Al. She said she likes Georgiana and lives there now “because I want to.”

Gaston said she was originally from downtown Belleville, on Highway 84, 10 miles west of Evergreen.

She said she worked in Georgiana for the power company where she retired after 33 years of service.  She explained that she was the clerk in a one-girl office where there were also a local manger and two linemen/meter readers.

“We were what was known as a local office, and Greenville was our district office,” she said.

At age 55, Gaston said she retired from the power company in Georgiana and moved to Monroeville where she worked for the sheriff for 10 years.

She said she retired again and came back to Georgiana.

“We don’t do a guided tour as such. I do like to walk around while they (visitors) are here,” she said.

“I tell them when they come in that my name is Margaret, if you have any questions or you want to take pictures, please just do all of that and ask questions.”

However, she said,  “If they are real interested, I walk with them because there are certain things I’d like for them to see.”

She pointed out a cutout of Hank Williams from Ritz Theatre in Greenville dating back to August of 1952 when he did a personal appearance. She said the cutout stayed at the theater until it closed. And she said it spent some time in a chicken house before it was donated to the museum.

She said the museum also has some of the old Sterling labels, which were the first songs Hank ever recorded.

And she said the entire collection is donated from Hank fans or family members.

“Our collection really and truly is a fantastic collection,” she said.

Gaston said she has worked for the museum for 13 years. She doesn’t plan on retiring again anytime soon.

“As long as I’m above ground an ambulatory, I plan on doing this,” she said.

She said at first the museum had volunteers. And when she went to volunteer, they were paying minimum wage.

“And I love it. I work two days a week and Leona (Simmons) works four, and both of us just have the best time you ever saw,” she said.

Gaston’s favorite item at the museum is a stage light from the old Louisiana Hay Ride during the Hank Williams Era.

Right after Hurricane Katrina, Gaston said she was working on a Monday when two young men drove up saying they had a stage light for museum.

One of the men, she said, was an insurance adjuster.

She said, “Do you believe in serendipity?  How they did they find us and decided to bring it to the museum?”

She said Hank Williams Sr., his mother and sister all lived at the museum home from the early part of 1930 to the later part of 1934.

“He was 7-years-old when he moved here. He got his first guitar when he lived here. And he shined shoes and sold peanuts at the depot, which was a block south. He attended school, which was a block north,” she said. “I like to tell people  that this is where it all began. It started right here.”

Gaston said she always enjoyed Williams’ music and actually saw him perform at the Grand Ole Opry in 1950.

“I don’t remember any of the songs he sang, I just remembered how the crowd reacted to him,” Gaston said. “The magic that he had on stage was comparable to what Elvis had.”

It’s that same magic that keeps visitors streaming into the museum. And each visitor gets the same reminder from Gaston.

“You’re walking on the same floor he walked on,” she says.