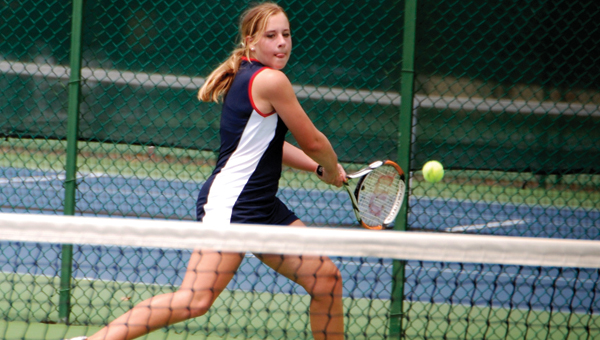 For the third time in as many years, the Fort Dale Academy girls tennis team earned a second-place finish at the Alabama Independent School Association tennis championship.

“Each of these girls has worked very hard on their tennis games and it was very rewarding to see all of that hard work pay off at the state tournament,” Fort Dale head coach Elizabeth Matthews said. “It has been a very exciting year for the team.”

Anne Matthews, the team’s lone senior, finished as the runner-up in No. 1 seed singles.

“Anne has competed as the No. 1 seed for three consecutive years,” Elizabeth Matthews said.  “In addition, she has competed in the AISA state finals for either singles, doubles or both every year that she has been on the state competition team, and she has more than one state championship under her belt. This year she finished runner-up at state, losing during the season and at state only to one girl who is headed to play Division I tennis, and who may be the finest player ever to come out of the AISA. This year’s state competition concluded an outstanding career for Anne and she will be sorely missed as the team leader next year.”

Scott claimed a runner-up finish in No. 2 seed singles.

“Ashton had a grueling match in the finals,” Elizabeth Matthews said.

Lightfoot and Carlton finished as runner-ups in No. 3 seed and No. 4 seed singles, respectively.

Both players finished the regular season undefeated in both singles and doubles.