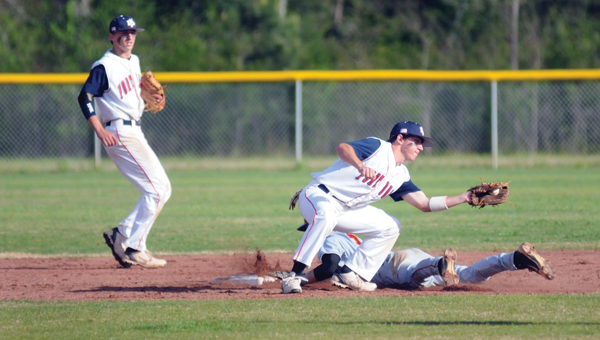 Fort Dale Academy’s fourth consecutive one-run loss has the Eagles’ packing their bags for the postseason.

Escambia Academy defeated Fort Dale 2-1 in 10 innings on Friday to earn a first-round home playoff series. The Eagles will open the postseason on the road against Bessemer Academy.

Fort Dale struck first on Friday plating a single run in the bottom of the fourth inning.

Chase Whiddon led the fourth inning off with a walk and moved into scoring position after an errant throw on a pickoff attempt. With Whiddon in scoring position, FDA head coach Josh Beverly inserted Matthew Bender to run for his catcher.

After Cade Tillery singled to center field to move Bender to third, the FDA speedster came around to score on a fielder’s choice off the bat of first baseman James Burkett.

The Eagles lead was short lived however.

Tillery led the Eagles’ at the plate with a 2-for-3 effort.

James Burkett was 1-for-4 with an RBI and Blake Harris belted a double for the Eagles.

Tillery, who came on in relief of Ryan Burkett, suffered the loss on the mound. The FDA right-hander tossed 3.1 innings and allowed two hits, a walk and a run. He fanned seven Escambia batters.

Fort Dale (12-10) will be back in action Friday when it travels to Bessemer to start a best-of-three series with the Rebels. Friday’s doubleheader will begin at noon.

The third game, if necessary, will begin at 1 p.m. Saturday.