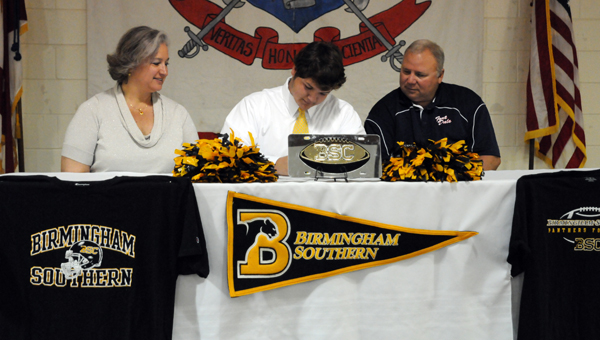 But on Monday, when the senior put pen to paper to scribble his signature it was the realization of a dream he’s had for nearly a decade.

Crocker, a three-year letterman at FDA, signed a national letter of intent with Birmingham-Southern College to play football for the Panthers.

“It feels good,” Crocker said. “I’m relieved to have that part over and know where I’m going.”

Crocker chose Birmingham-Southern over Huntingdon College in Montgomery and Averett University in Virginia.

“Birmingham-Southern felt like home,” Crocker said. “I liked the atmosphere, and the coaches and the teachers really seemed to care.”

Crocker, who started at right guard on Fort Dale’s 2010 state championship team, is expected to play along the Panthers’ offensive line.

“This has been my dream every since I started playing football in the third grade,” Crocker said. “Now it’s a reality.”