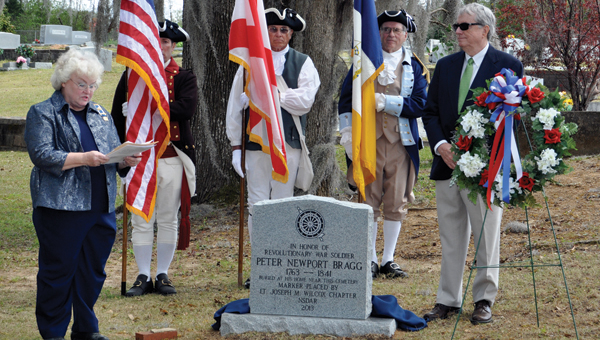 A bit of early American history came to life at a cemetery in the Braggs Community of Lowndes County Sunday afternoon.

The Lt. Joseph M. Wilcox Chapter of the National Society of the Daughters of the American Revolution (NSDAR) and the Lowndes County Historical and Genealogical Society were joined by state and local DAR representatives, the General Richard Montgomery Sons of the American Revolution color guard, Bragg family descendants and members of the Braggs Community for the dedication of a marker at New Bethel Cemetery in Braggs in honor of Peter Newport Bragg (1763-1841), a Revolutionary War soldier.

“Someone out there watching is very proud to be receiving this honor today and to see that his family members are here to honor him also and have made his name so proud,” said Connie Grund, state regent of the Alabama Society DAR said.

The DAR, as part of its mission, tries to locate and mark the graves of Revolutionary War soldiers, Styles said.

“We don’t know exactly where Mr. Bragg’s grave is. So, we decided to put a marker here and honor him,” she said. “It will be seen and people will remember because he gave the community its name.”

The purpose of DAR is to preserve the history and the memory and to honor the memory of those who served to give us our freedom, according to Grund.

She also noted that it was a special occasion when family members could be on hand.

Among family members present were Harry Houghton Smith, Dora Haas and Ryan Terry, all of Montgomery, and Julia Fellows of Madison.

“I want to thank all of you for doing this. It’s a wonderful thing that we remember our patriotic fathers and grandfathers and great-grandfathers and have a moment of recollection that the freedoms that we have are based on their sacrifice,” Smith said of the honor given his ancestor.

According to family history, Bragg was born March 4, 1763, the son of John Bragg and Mary Newport in Fauquier County, Va.

At the age of 16 he joined the American Army under the command of General Nathanael Greene and was in the battle of Guilford Courthouse, as well as others.

In 1829, Bragg and his family moved to Lowndes County in Alabama, settling in the area now known as Braggs.

Smith said his ancestor who died May 21, 1841, was buried in his front yard under an oak tree.

While the family history notes that after Bragg’s death his widow and five of their sons moved to Arkansas, his oldest son, John Brewton, and daughter, Abigail Bragg Wiley, remained in Lowndes County.

Smith said, however, one of Bragg’s sons, Peter Newport Bragg Jr.’s, son, Walter Lawrence Bragg, came back after the Civil War and practiced law in Montgomery, becoming the first president of the Montgomery Bar Association.

“I think it’s wonderful. Particularly at these times it is important to remember our ancestors, in particular those who fought for our freedom,” Smith said.