Barbershop is a Greenville tradition 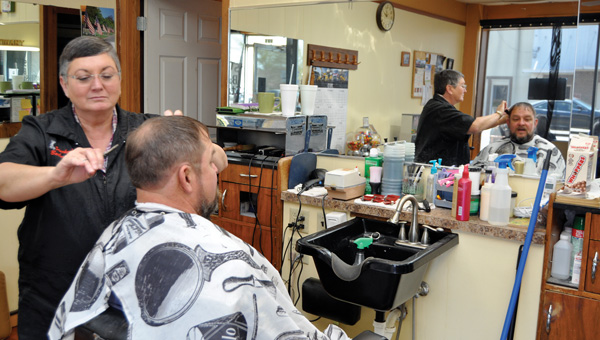 Stuckey’s Barber & Style Shop is a place to get more than just a haircut.

The barbershop, owned and operated by Linda Stuckey, has been located along Commerce Street since 1932 when Will Jones first opened its doors. Stuckey began cutting hair at the barbershop in 1992. She purchased the business in 2005 from longtime barber Al Middleton.

More than eight decades since its opening, the barbershop is still a gathering place for locals, who can catch up on local news, chat about the weather or gets tips on farming, all while getting a haircut.

“We’ve got some very good, faithful customers who have been coming for years and years and years, even before I came, and they continue to come,” Stuckey said.

While most of the barbershop’s customers are from Butler County, Stuckey said there are a number of men who drive down from Lowndes County and even Montgomery to use the barbershop.

Stuckey said she believes the atmosphere at the barbershop is what keeps customers coming back.

“We want to pamper our customers, all of us, especially me,” Stuckey said. “I try to give you such a haircut that you know you can’t get it anywhere else.”

John Smith, who moved to Greenville from Navarre, Fla., has been a customer of Stuckey’s for several years.

“They give a good haircut,” Smith said.

Kenny Hall, a Greenville native, is another regular at the barbershop.

Hall said he couldn’t tell what keeps him coming back to the barbershop.

‘We really work on getting (customers) in and out,” Stuckey said. “We don’t take appointments. It’s first come, first serve. Anyone can come in and get in anybody’s chair and be just as happy when they leave.”