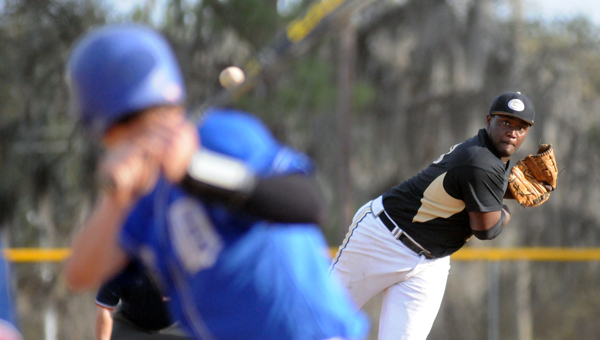 For three innings on Tuesday Greenville High School gave No. 11 Demopolis High School all it wanted.

But then came the fourth inning.

In the top of the fourth, Greenville committed three errors that led to three runs and ultimately powered Demopolis to a 14-3 win over Greenville.

“We gave them six outs in the inning and that was the momentum swing,” Greenville High School head coach Richard Kelly said. “We can’t d that against a team like Demopolis.”

Greenville (3-12, 0-1) fell behind early after allowing two runs in the top of the second inning, but the Tigers were able to rally to take a 3-2 lead in the bottom of the third inning when Michael Smith belted a three-run homer over the left field fence that scored Devontae Posey and Jaquan Smith.

The Tigers would fail to push any more runs across the plate, stranding eight runners on base.

Michael Smith finished the game 2-for-3. Jaquan Smith was 2-for-4 and Curt Mosely added a hit in the loss.

Greenville right-hander Ozell Carter suffered the loss for the Tigers.

He allowed seven hits and two walks, while striking out five Demopolis batters.

“Ozell pitched a phenomenal game,” Kelly said. “Pitchers must work ahead in the count and deal with adversity. Ozell did both.”

Greenville will be back in action Thursday when it travels to Demopolis for a rematch. The doubleheader is slated to begin at 4 p.m.