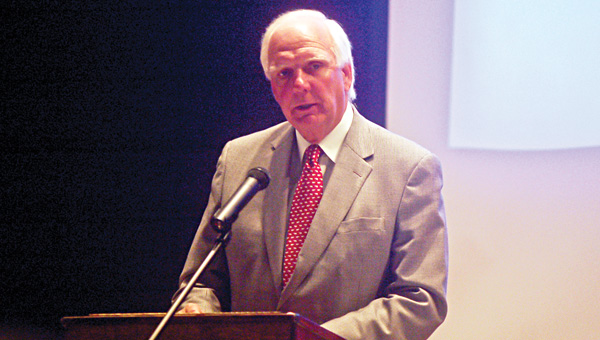 Mal Moore, the longtime Athletic Director at the University of Alabama and a Dozier native, died last Saturday at the age of 73.

Moore had been involved in athletics at the University of Alabama for more than 50 years as a player, assistant coach and Athletic Director, and he was a part of 10 national championship teams, 16 SEC championships and 39 bowl games.

Moore graduated from Dozier High School in 1958, where he was the football team’s quarterback.

“We had 18 people in my class,” Moore told the Luverne Rotary Club in 2011. “Back then, everybody made the football team.”

He also said that some of his fondest memories were of playing football at Dozier, and he remembered when lights were put up at the stadium.

Two Luverne residents, John Wise Sr. and his father-in-law Steve Hicks, were responsible for taking Moore to his first college football game — a trip to Birmingham to see the Crimson Tide play.

“He was a senior in high school and a good athlete,” Wise said. “We were recruiting him for Alabama.”

Moore attended the University of Alabama and played quarterback from 1958 to 1962 under Bear Bryant, though much of his time was spent as a backup to Pat Trammell and Joe Namath.

He joined Alabama’s staff as a graduate assistant in 1965 and worked as an assistant coach under Bryant until 1982.  He returned to UA in 1990 as the quarterbacks coach and offensive coordinator, and in 1994, Moore was named the Assistant Athletic Director.

He became the school’s head Athletic Director in 1999 and served until he announced his retirement on March 20 of this year.

Despite his success, friends say that he always remembered his roots.

“He was a fine person, and he never forgot where he came from,” Wise said.

“Any students that went to Alabama, he’d tell them two things they’d need to do: go to church and remember where they’d come from,” said Sarah Clark. “He was a wonderful man.”

James Hollis said that Moore remained an athlete throughout his life.

“He loved to quail hunt, and he was an excellent shot,” he said. “He hunted here a good bit, but he also hunted everywhere.  He was a good golfer, too.  He was just an overall good athlete.”

Friends say that Moore also did charity work for the Boys’ and Girls’ Club and raised awareness for Alzheimer’s Disease, which his wife Charlotte suffered from.

“He loved his family,” said Hollis. “His wife had Alzheimer’s, and he visited her in the nursing home every day.  One day, one of his friends asked him, ‘Mal, why do you go see her every day?  She hasn’t known you in 10 years.’  He replied, ‘But I know who she is.’ ”

Moore’s name also adorns the Mal M. Moore Athletic Facility, which is the centerpiece of the athletic department at Alabama and considered one of the top facilities in the country.

In the wake of Moore’s death, everyone from Crenshaw County residents to Alabama’s governor has expressed sadness at his passing.

“Coach Moore will be deeply missed. I’ve known Mal for over 30 years and have always considered him a good friend as well as a good man,” Gov. Robert Bentley, a Tuscaloosa resident, said in a statement. “He was devoted to UA Athletics, and he will also be remembered for his dedication to his family. Mal made a positive impact on our entire state. I want to offer my deepest condolences to his family during this time.”

A public service commemorating his life will be held at Coleman Coliseum on the Alabama campus on Thursday, April 4 beginning at 3 p.m.

A private church service will be held Thursday morning and burial will be at 11 a.m. Friday at the Good Hope Cemetery in Dozier.