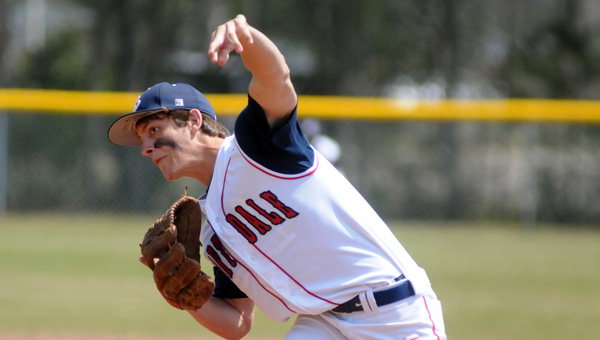 Fort Dale Academy left-hander Ryan Burkett may not have overpowered No. 3 Pike Liberal Arts School on Saturday, but he gave ninth-ranked Eagles a chance to win.

The FDA lefty tossed seven innings, allowing seven hits and two walks, en route to a 7-3 win over the Patriots.

“He stepped up for us,” Beverly said. “You can’t ask much more from a sophomore than what he gave us.”

Burkett kept the Patriots at bay until the Eagles’ bats came alive in the fifth inning.

Fort Dale broke open a 2-2 contest by plating five runs in the sixth.

“We did a good job of hanging around until we got our offense going,” Beverly said. “Pike Liberal has a good team and we were able to battle and come away with a win. It’s been a long time since we’ve beaten them.”

Burkett also helped lead the Eagles at the plate with a 2-for-4 effort that included three RBIs.

James Burkett was 2-for-4 with a double and two RBIs and Chip Taylor was 2-for-3 with two runs scored.

Fort Dale (12-6, 3-1) followed its win over the Patriots with an 11-0 win over Evangel Christian Academy on Monday in Montgomery.

Taylor earned the win on the mound after tossing all five innings. He allowed just two hits and struck out four.

Taylor and Ryan Burkett each finished the contest 1-for-3 with two RBIs to help lead the Eagles’ offense.

Dylan Jones was 1-for-3 with an RBI and Chase Whiddon belted two doubles in the win.