Stars come out at W.O. Parmer 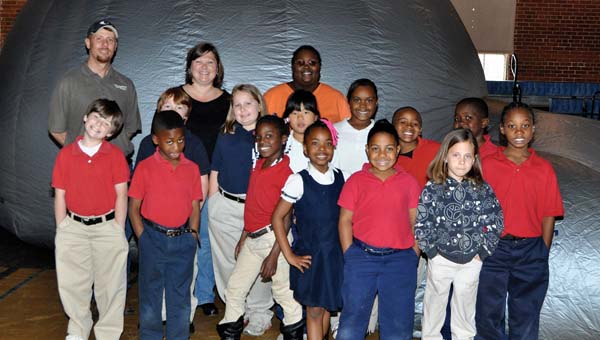 The stars came out a little early on Friday for second graders at W.O. Parmer Elementary School.

The students, who have been studying the constellations that fill the night sky, were able to see all the celestial shapes thanks to Starlab, a traveling planetarium brought to the school by the Woodmen of the World Life Insurance Society.

“We’re studying constellations and that’s what the children are seeing today,” second grade teacher Heather Conway said. “The children have loved it.

Conway said the Starlab helped the students see how the constellations move and rotate.

She also told the students how sailors used the North Star to navigate.

Watson explained that two constellations seen in the spring were Cancer and Canis Minor. She also said Canis Minor and Canis Major were the hunting dogs of Orion the Hunter.

Mary Katherine Smith, community outreach manager for Woodmen of the World in south Alabama, said the portable Starlab Planetarium brought to W.O. Parmer Elementary is offered free of charge to elementary, middle and high schools and is used as a supplement to what the students study.

She said Woodmen of the World is a nonprofit fraternal benefit insurance company, which is a member owned.

She said fraternal dues are spent on service projects, donating to charities and planning community out reach events to support other non-profits.

Smith said the company also presents American flags to other nonprofit organizations, schools and churches and has a summer camp in McKenzie.

Jason Whittle, a Woodmen of the World field rep who serves Butler and Lowndes counties, said the company also does cleanup and disaster relief as well as history awards.

“This is a field trip without ever having to leave the school,” Whittle said of Starlab.