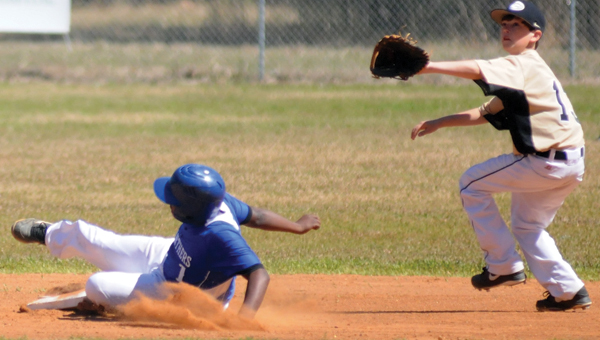 It wasn’t quite the start Georgiana School was hoping for Saturday.

The start was shaky. The ending was not.

The Panthers rallied from a 2-0 deficit to score an 8-6 win over in-county rival Greenville High School in Georgiana.

“We’ve started in a hole so many times this year it seems commonplace for us,” Georgiana head coach David Watts said. “Holding Greenville scoreless over the next couple of innings until we could get our bats going was the key.”

After being stifled at the plate in the first two innings, Georgiana put together a pair of singles and capitalized on a Greenville error to tie the game at 2-all.

In the top of the fourth, Watts pulled Sheffield and sent Justin Oikle to the mound. The change in velocity presented a problem for the Tigers.

While Greenville began to struggle at the plate, Georgiana found its groove and pushed three runs across in both the fourth inning and the fifth inning.

“We struggled early because we were not patient and we tried to hit pitches that we couldn’t handle,” Watts said. We gave away some outs early hitting the pitcher’s pitch in hitter’s counts. We did better after the second inning of getting our pitches in those situations.”

Richard Boggan led the Panthers at the plate with a 2-for-2 effort that included two RBIs.

Michael Smith led Greenville with two home runs. He finished the game 3-for-3 with four RBIs.