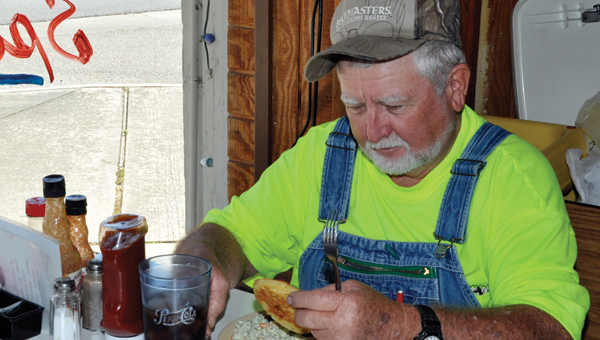 Robert Gafford is a regular at the Court Square Café, which has become known for its old-fashioned home cooking and good company. (Advocate Staff/Fred Guarino)

Patty Powell has owned and operated the café located across from the Butler County Courthouse for 18 years.

“I’ve always wanted to (own a café),” Powell said. “It was later in life when I did it because I was going here and there moving different places.”

She said she finally got her own restaurant in 1995, but she was certainly no stranger to the business.

Powell has taken that experience and used it to attract diners by the dozen to her small café located in downtown Greenville. Over the years, Court Square Café has built a following of regulars who meet to hash out of the days news over breakfast or a big bowl of banana pudding, the café’s signature dessert.

“Most of (my customers) are regulars,” Powell said. “I do have some travelers that stop in here when they are going to and from the beach.”

Even those become regulars.

“Usually the same ones come through every year,” Powell said.

Sue McGough, a resident of Honoraville, is one of Powell’s regulars.

“It’s all good,” McGough said of the menu.

McGough joked that it’s unfortunate that the homemade desserts, including the coconut delight, are so tasty.

Robert Gafford, another regular at the café, said he likes everything on the menu, but especially the fish, cole slaw and dessert.

Rosie McLain, who often eats at the restaurant with her sisters Brenda McLain and Elizabeth Gregory, said that while the fried chicken salad is tasty, her favorite thing about the café is its “hometown feel.”

Powell, who operates the restaurant with her daughter, Trish McCullough, and Deborah Betterton, seems to have found the recipe for success.