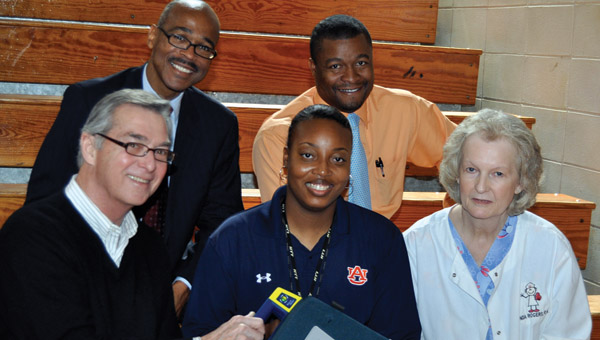 A pair of Butler County Schools got a little help in making their campuses safer.

On Friday, Cris Brown, executive director of Alabama LifeStart, an initiaive of Children’s of Alabama and the University of Alabama at Birmingham donated an automated external defibrillator (AED) to Greenville Middle School and McKenzie School.

An AED is a lightweight, portable device that delivers an electric shock through the chest to the heart. The shock can stop an irregular rhythm and allow a normal rhythm to resume in a heart in sudden cardiac arrest. Sudden cardiac arrest is an abrupt loss of heart function and if it’s not treated within minutes, it can quickly lead to death.

Both GMS and McKenzie were presented with the devices because the schools have agreed to teach its students to properly use the life-saving devices.

According to Brown, GMS and McKenzie were among the first 10 schools in the state to receive a free AED.

Brown said the reason the defibrillators are being given to the schools with the AED curriculum is to “help the kids to know what to do.”

Butler County School Superintendent Darren Douthitt said he was quick to seek the device for the schools.

“I don’t pass up any opportunity to get any resource that might be helpful to our kids,” he said. “ I come in here often for basketball games and for athletic events. I knew there was not an AED in (the GMS) gym.”

While he said the devices are on every campus, one was needed for the gym.

Greenville Principal Curtis Black was also happy to get the device.

“With students facing a variety of health issues in this day and time, it is helpful to prepare in case of an emergency situation,” Black said. “It’s best to have it and not need it than to need it and not have it.”