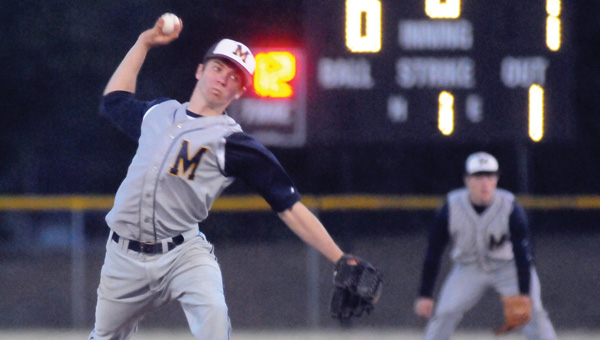 McKenzie scored 17 unanswered runs to earn the 17-4 victory over its in-county rival.

McKenzie head coach Tony Norris said he was proud of the way his squad battled back after falling behind early.

“I’ve been waiting all season for us to keep playing once we get down,” he said.

Greenville jumped out to a 3-0 lead in the bottom of the first inning after a McKenzie throwing error on a sacrifice bunt allowed to runs to score. On the next at bat, Ozell Carter banged a single into the outfield to plate another run.

Greenville tacked on one more run in the second inning when Briar Kirby laid down a squeeze bunt to score Skilar Moorer from third.

“We are not hitting very well right now, and I am doing everything I can to produce runs,” Greenville head coach Richard Kelly said. “Briar Kirby did a phenomenal job putting the ball down to allow a run to score.”

Those were all the runs that McKenzie right-hander Dustin Moorhead would allow.

“Dustin did a great job for us,” Norris said. “I can’t begin to tell you how proud I am of him. He did struggle with location early but he kept fighting and battling. We needed that kind of game from him.”

Kelly said once Moorhead settled in, Greenville’s struggles at the plate were multiplied.

“Once he settled down in the fourth inning, he gave us problems,” Kelly said. “We took advantage early of their mistakes, but a good team like McKenzie always eliminates mistakes, and that is what they did late.”

McKenzie got all the runs it needed in the fourth inning.

An RBI-double by Jeffrey Fuller started a McKenzie rally that would result in six runs.

“We strung together some hits,” Norris said. “Hits finally started dropping for us in the fourth. After that we kept stretching the lead, which is something I have been preaching to my guys.”

Carter, Kirby and A’Darius Bowen each had a hit for Greenville.