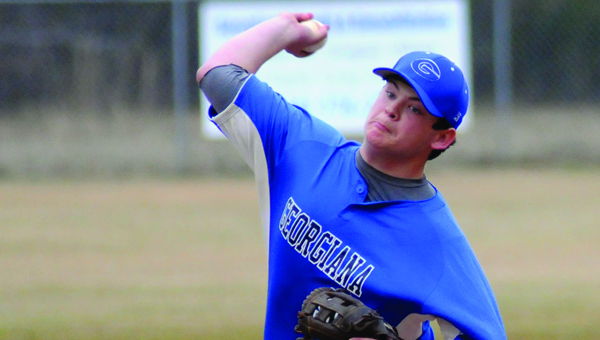 The Tigers topped the Panthers 6-0 in Georgiana.

Georgiana head coach David Watts said despite the loss, he was pleased with his squad’s effort.

That was most evident at the plate.

The Panthers struck out 14 times in 23 trips to the plate, and managed just two hits.

“We were overpowered at the bottom of our lineup,” Watts said. “We had 10 at bats from our No. 6 through No. 9 hitters and we struck out 10 times. We have a lot of young guys with very little experience, but they work hard and will do nothing but get better as the season goes on.”

The bright spot for the Panthers came on the mound.

Right-hander Matt Sheffield surrendered a pair of earned runs in the top of the first before recording a single out, but worked his way out of the trouble thanks to a double-play ball and an infield pop up.

Sheffield, who suffered the loss, worked four innings and gave up four runs, two of which were earned. He yielded three hits and a walk and struck out five batters.

“Matt did an outstanding job for us on the mound,” Watts said. “He made some mistakes with location early, but really settled down and pitched well.”

Watts also praised hurler Tarien Crittenden, who came on in relief of Sheffield.

“He pitched well in his first varsity contest,” Watts said. “I was pleased with the way he pitched.”

Crittenden tossed three innings and allowed one earned run on a walk and two hits. He struck out two batters.

Crittenden also had one of the Panthers’ two hits.

Richard Boggan had the other. He was 1-for-3 with a double.

Georgiana (0-1) will be back in action Tuesday when it travels to face Pleasant Home High School. First pitch is set for 4:30 p.m.