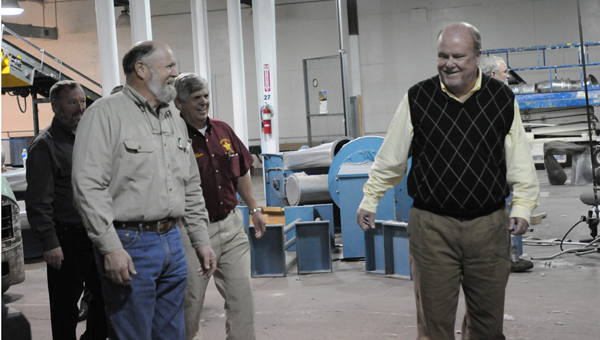 Greenville Mayor Dexter McLendon can remember when the Rheem Manufacturing parking lot was full of cars.

“There’d be hundreds of cars out here,” he said. “This parking lot would be full.”

It’s been nearly two years since the parking lot at the facility has been full.

On Monday, McLendon announced that the City of Greenville has purchased the facility from WestPoint Home, which purchased the building from Rheem in 1999.

McLendon said the City bought the building in an effort to spur job creation in Greenville. He hinted that there might be a potential business already interested in locating in the building, but due to signing a non-disclosure agreement, he was unable to share more details about the likelihood of a specific business locating in the facility.

“I’m not saying that we have a business lined up yet, but I don’t think this is a gamble,” he said. “I’m not a gambler. I believe this is a good investment for our community.”

McLendon said a major benefit to the City owning the building is that it eliminates a third party during negotiations with potential businesses in the future.

“When you have two people involved it’s a lot easier to make a deal than when you have three,” he said. “This way the building is ours and we can negotiate with potential businesses, and I think that’s a major benefit when you start talking about attracting industry to the area.”

David Hutchison, the executive director of the Butler County Commission for Economic Development, said having a move-in-ready, 300,000 square-foot building is a tremendous benefit when recruiting businesses.

McLendon said the City will use a certificate of deposit (CD) and a loan from a local bank to fund the purchase. He said if a business were interested in locating in the building, the City would consider selling the property or leasing it with an option to buy.

“It’s a great facility and any number of businesses could use it,” he said. “It could be used as it is or it could be customized if a company needed to do that.”

McLendon said he is confident another business will one day call the building home.

“The first step was owning the building,” he said. “You’ve got to own the building before you can negotiate with a business about moving in. That’s what this is all about. Buying this building is about creating jobs. Hopefully one day we’re going to put some people in here to go to work.”