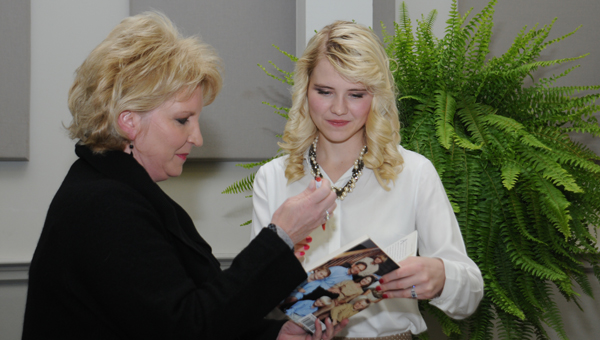 Elizabeth Smart wanted to give up.

After being kidnapped and abused at the age of 14, Smart thought about all the stories she had seen on television about children who had been abducted, abused and murdered.

They were the lucky ones, she thought.

“I thought at least they didn’t have to live with this pain,” said Smart, who served as the keynote speaker for the Healthy Woman Second Anniversary Celebration Saturday night.

But something kept Smart from giving up.

“I remember thinking about everyone I cared about and if I’d ever see them again in this life,” Smart said.

It was love that ultimately saved Smart, who was held captive for nine months by Brian Mitchell and Wanda Barzee.

“I’ll never forget feeling like (Mitchell) had crushed my spirit beyond repair,” Smart said. “I felt so worthless and so miserable. … I remember thinking that even if I were rescued, who would care? Who would want me back? Who would love me?

Eventually, Mitchell and Barzee took Smart from Utah to California. After attempting another kidnapping, which failed, Mitchell began to talk of moving to Boston, New York or Philadelphia.

Smart knew that if they made it to the east coast her chances of being rescued would be greatly diminished.

So, she went to talk to Mitchell.

Mitchell wandered off for a few moments.

“Then he finally came back and said, ‘I think you’re right. I think we should go back to Salt Lake,’ ” Smart said.

Mitchell, Barzee and Smart hitchhiked back to Salt Lake City, Smart’s hometown, dressed in “robes right out of a Bible scene.”

They were walking down a major Salt Lake City street when someone recognized Smart, whose story had been featured on “America’s Most Wanted,” and called police.

Police officers then separated Smart from her captors and began to ask her questions. At first, Smart answered just as she had been instructed to answer by her captors.

“They asked me if I was Elizabeth Smart, and obviously, the majority of me wanted to scream yes,” she said. “But I held back for a minute. I was so trained. If they didn’t get me, they were going to get my family. What perfect targets my family would be, suffering one tragedy already. So that held me back. What if the police didn’t believe me? What if they put me back with my captors?”

But eventually the majority won out in Smart’s argument with herself.

“Whenever I argue with myself, the majority always wins,” she said with a smile.

Smart was taken to a police station and placed alone in a small room.

She thought maybe the authorities didn’t believe her story. Maybe they were going to send her to prison, which she said didn’t sound that bad given where she had just come from.

Then the door flew open.

“My dad came running in,” she said. “I’ve never been so happy in my life to see someone.”

That night, Smart was reunited with her family.

The next morning, her mother gave her a piece of advice that Smart credits with helping her overcome the ordeal that robbed her of nine months of her life.

”She told me, ‘Elizabeth, what this man has done to you is terrible. There are no words to describe how wicked and evil he is. He has stolen nine months of your life that you can never get back. The best punishment you can ever give him is to be happy, follow your dreams and do what you want. Feeling bad, living in the past and letting him haunt you is only allowing him more control over your life, more time stolen from you.’ ”

Today Smart is an activist on behalf of kidnapping survivors and child victims of violence through her Elizabeth Smart Foundation, the national Amber Alert program and Radkids, a program that teaches children how to protect themselves from sexual predators.

“I never asked for this to happen to me,” Smart said. “But I can be grateful for it because it has opened so many opportunities for me, and given me a voice so I can speak out against child abuse, kidnapping and sexual abuse. That doesn’t mean I haven’t had my ups and downs. Of course I have. I am not perfect, as much as I’d like to be. We all have those days, we all have those trials, we all have those experiences. They don’t need to define who we are. It’s what we choose to do with our lives.”