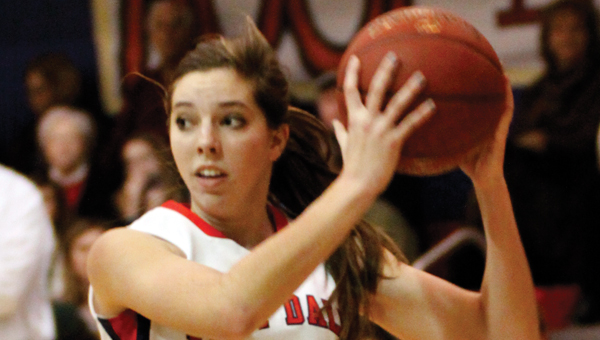 Fort Dale Academy clinched first place in its area with a 52-25 win over Morgan Academy on Tuesday.

With the win, the Lady Eagles (13-7, 5-0 Class AAA, Region 2, Area 1) remained perfect in area play and secured a bye in the first round of the region tournament, which will be played at Morgan Academy beginning Jan 31.

The Lady Eagles blew open a close game by outpacing the Lady Senators 12-0 in the second period. At the intermission, Fort Dale led 27-13.

The Lady Eagles outscored the Lady Senators 25-12 in the second half to cap the win.

“Caroline is really playing with a lot of confidence right now,” Fort Dale head coach Reggie Mantooth said. “We have needed her to score more and be more aggressive and she has done that the last few weeks.”

Theresa Scott tallied a double-double in the win.

The Fort Dale forward scored 11 points and pulled down 14 rebounds.

“Theresa has rebounded the ball well all year,” Mantooth said. “She continues to improve offensively and has really worked hard on her offensive game.”

Anne Matthews and Ashton Scott each scored six points for the Lady Eagles.

Fort Dale will play Escambia Academy on Friday at 6 p.m.

The Lady Eagles will travel to Tuscaloosa Saturday to take on Tuscaloosa Academy in their regular-season finale. The game is scheduled to begin at 6 p.m.