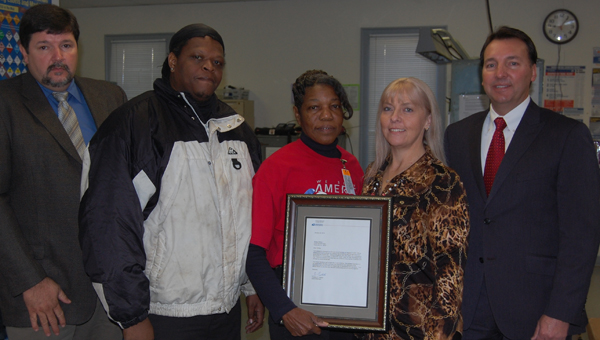 Shirley McKee, of Greenville, was presented the U.S. Postal Service Hero Award for her efforts to see that medical care was given to an accident victim in Lowndes County.

The award was presented Friday by District Manager Timothy Costello at the Hayneville Post Office.

According to Hayneville Postmaster Theresa L. Myracle, on Aug. 27, McKee, a rural carrier for Hayneville, was out delivering mail on Lowndes County Road 17 when she noticed a car overturned on the side of the road.

Myracle said according to McKee, she thought the accident must have happened earlier and the car just had not been removed.

That wasn’t the case.

“While passing, she heard the faint sound of a (car) horn,” Myracle said. “She got out and yelled down, asking if anyone was there.”

Myracle said what happened next was she heard a gentleman yell back for help and rushed down to find Michael Cargill of Tyler pinned in the car.

Myracle said McKee next called the office and explained what happened.

McKee stayed with him until help arrived. Cargill was later airlifted to an area hospital.

“That was a blessing because many folks would not have stopped,” Cargill said. “And if they didn’t know the person they probably wouldn’t have stopped to help them.”

McKee said she was just happy to be able to help.

“I am just so thankful that I was able to help, and that he is still here,” McKee said.

Myracle said at times rural mail carries are a “life link” to those they serve.

“A lot of times postal service employees, especially rural carriers out there in the rural areas are the only people that some of our rural customers see every day,” Myracle said. “The man was far enough down the hill where no one saw him. I just feel like people are put in situations for a reason.”