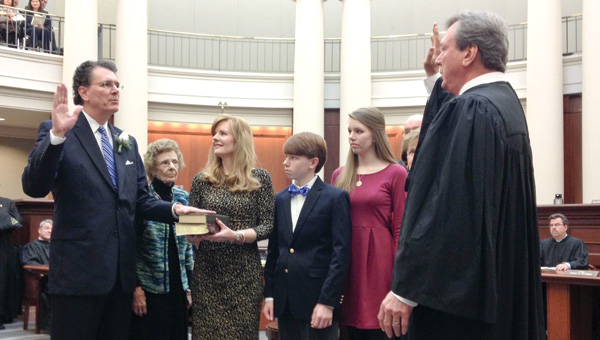 After years of working in state courts, one of Crenshaw County’s own has taken his place on the highest court in Alabama.

Tommy Bryan was sworn in as an associate justice on the Alabama Supreme Court last Friday afternoon, following a win in last year’s election.

The son of Elias Daniel Bryan and Margie Spivey Bryan, he is a 1974 graduate of Brantley High School and grew up on the family farm.

“I loved high school,” he said. “I was one of those kids that enjoyed going to school.  There was more happening at school than on the farm.”

That love of school influenced his first career choice, which wasn’t law.

“I was going to be a teacher,” Bryan said.

He attended Troy State University and earned a masters in education before landing a job at a private school in Montgomery.

However, he said he didn’t enjoy teaching as much as he thought he would.

That’s when a fraternity brother suggested that Bryan look into law school.

From there, a job as a staff attorney with the Court of Criminal Appeals led to a desire to become an appellate court judge.

“The aspect I enjoyed was research and writing,” Bryan said. “A lot of people can present a case in front of a jury, but they hate research.  I was the opposite.  I enjoyed sitting back and making a detailed analysis.”

During a stint as assistant attorney general for the Alabama Department of Environmental Management, Bryan became familiar with administrative law and defending technical regulations.

Administrative law is one of the primary jurisdictions of the Court of Civil Appeals, and Bryan ran under the banner of his expertise in the area.

He was elected to the Court of Civil Appeals in 2005, and despite his success, he said he had never considered a spot on the Supreme Court.

“Someone suggested that I consider the Supreme Court, but I had never really thought about it,” he said.

Now that he has won election to the Supreme Court, Bryan will be handling both civil and criminal cases.

The work won’t be unfamiliar — the Supreme Court can hand civil cases down to the Court of Civil Appeals, where Bryan said about a fourth of the court’s case load came from while he served on that court.

Having ascended to the highest court in the state, Bryan said he has no intentions of vying for a spot on the U.S. Supreme Court.

“I don’t think I have those kind of connections,” he laughed.

Despite being known statewide, he also remembers where he is from.

Whenever law books are published, the hometowns of judges are listed alongside their names.

Bryan said the tradition used to be that you actually listed your hometown, but recently, the trend has been to put your place of residence.

“I put Brantley on the list because that’s where I’m from,” he said.

Bryan and his wife Pamela have two children: Thomason, a daughter, and Tucker, a son.