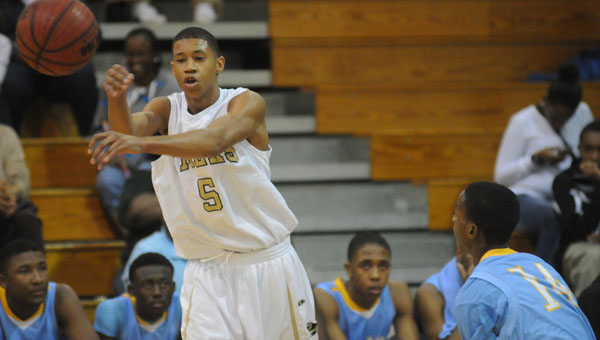 That was certainly understandable.

But it wasn’t simply coming out ahead on the scoreboard that plastered the smile across Kelly’s face. It was the way in which his team won.

Javarrius Cheatham and Zac Smith each connected on two 3-pointers in the period, while Kent Riley added another.

“I came out shooting well from behind the arc, which gave me confidence throughout the game,” Cheatham said.

Kelly said Greenville’s early success from beyond the arc Tuesday was a product of the Tigers correctly reading the Saints’ defense.

“We are blessed with multiple guys who can shoot sufficiently from the arc,” Kelly said. “Anytime a team has quality 3-point shooters they always have a chance (to win) We just read the defense and reacted to what they gave us. Our guards have gotten much better at reading that, and that sets up good looks for our outside shooters.”

In the second half, the Tigers were able to adjust when Selma took away its outside game.

“Selma always does a great job, and they made adjustments at halftime,” Kelly said. “We were fortunate to build a large lead that allowed us to go into our clock offense.”

The Tigers’ “clock offense” consisted of its guards weaving near the top of the key. On a handful of trips down the floor it led to wide open looks at the basket after a backdoor cut. It also wore down the Selma defenders.

“That’s something new that we installed, and I was proud of the execution when it was time to run it,” Kelly said. “At practice we preached being patient with it and allowing the open layups to happen.”

“Selma started to come out on us (preventing the outside shot), and we fed our big men the ball, and I think that wore the Selma defense down,” Cheatham said.

Cheatham led the Tigers with 15 points.

Greenville will be back in action Friday night when it takes on Sumter-Central High School. The game is set to begin at 7:30 p.m. in York.