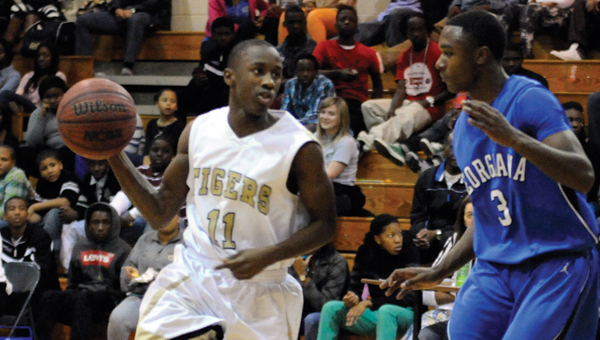 Greenville High School’s Javarrius Cheatham and Zac Smith put on a three-point shooting clinic in the third quarter to propel the Tigers to a 76-68 win over in-county rival Georgiana School Saturday night in Greenville.

Despite the shootout that would ensue, the first half was a neck-and-neck race, as Georgiana’s Jacquez Payton and Cameron Matthews vied for control of the game’s pace.

Georgiana got to the free throw line early and often for much of the first half, but missed attempts prevented the Panthers from taking what could’ve been a commanding lead going into the third quarter — a lead that they would desperately need.

Thanks to some excellent outside shooting from Devin McMean, the Panthers overcame a seven-point deficit to take a 39-35 lead heading into the intermission. But the Greenville team that left the gym deflated at halftime wouldn’t return.

Instead, the Tigers would create several fast break opportunities through a harrowing half-court press that left the Panthers unable to respond to a hail of three pointers.  For Cheatham and Smith, the rim seemed to grow in size as each shot that left their release seemed laser-guided to its goal.  The duo with the hot hands would combine for five consecutive threes, giving the Panthers their largest deficit of the night at 13 points.  The seemingly torrential rain of threes would end along with the third quarter, but not until after Greenville had outscored Georgiana 22-9 in eight minutes of play.

“At the half, I challenged our team to pick up the intensity in our half-court defense,” said Greenville head coach Richard Kelly. “They met the challenge, and the game changed.  They do a great job (at Georgiana), but I’m proud of my boys and the way they finished.”

Despite some late-game desperation from the Panthers and a remarkable 11-point effort from Payton, the clock ultimately proved the biggest opponent for Georgiana in the fourth quarter.

Payton led all scorers with 21 points.

Cheatham and Zac Smith each scored 19 points to pace the Tigers.

With the win, Greenville improved to 6-8 on the season. Georgiana owns a 12-4 mark.