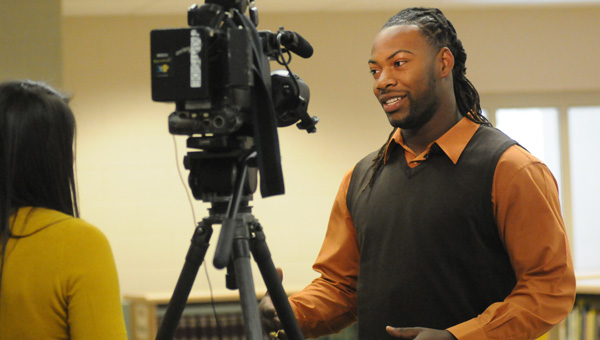 Za’Darius Smith wanted to go to the school where he could make the biggest impact.

That turned out to be good news for the University of Kentucky.

On Wednesday, the 6-foot-5, 252-pound junior college transfer, signed a national letter of intent to play for the Wildcats.

“It’s been rough, tough, hard times (deciding where to go) for the next two years, but I’m going with the Wildcats,” Smith said during a signing ceremony at Greenville High School.

On Wednesday, Smith had a Kentucky and a Texas A&M hat on the table in front of him.

In the end, his choice came down to familiarity.

“It came down to a trust issue,” Smith said. “I trusted the coaches and the staff and felt comfortable. (Brumbaugh) coached me for a year and he helped get me to where I am now with offers from ACC and SEC schools, and I know he’ll continue to help me improve in the future.”

Smith had a standout career at East Mississippi Community College where he helped the Lions win the 2011 NJCAA Football National Championship as a freshman.

This past season, the Greenville native ranked as the Lions’ leading tackler among defensive linemen with 47 total stops, including 30 solo tackles and a team-best 6.5 sacks. He was also credited with four forced fumbles, two pass breakups and an interception during his sophomore campaign.

Smith finished his two-year stint with the Lions with 66 total tackles, including 45 solo stops, 11 sacks and seven other tackles behind the line of scrimmage.

The former basketball standout at GHS, was ranked by JCGridiron.com as the nation’s top-rated junior college strong-side defensive end.

Smith said he believes he can help strengthen the Wildcats’ defense.

“I wanted to take my talent to Kentucky because I believe we can do a lot there,” he said.

Smith expects that to change in 2013.

“We’re going to make big plays on defense,” he said with a smile.