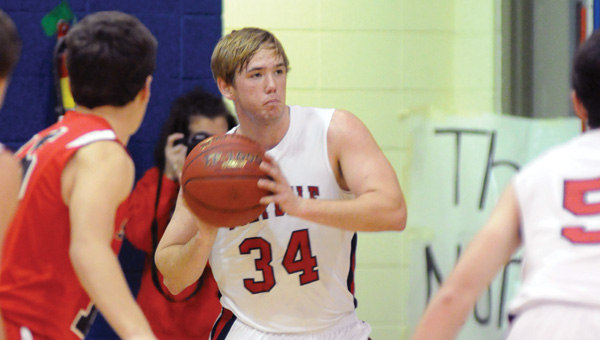 Bates was 10-for-13 from the floor with nine rebounds and three blocks.

His efforts in the championship game earned him tournament MVP honors.

“Jack really played well,” FDA head coach Reggie Mantooth said. “We were able to get him the ball in position for him to score, but he did a great job of finishing plays and getting good position.”

Fort Dale’s Chip Taylor, who was named to the all-tournament team, recorded a double-double with 16 points and 10 rebounds. Taylor also tallied two assists and three steals.

Fort Dale’s Wesley Scott was also named to the all-tournament team. He scored eight points and pulled down seven rebounds in the championship contest.

The Eagles (8-2) outpaced the Patriots 33-26 during the second half, including a 21-15 advantage in the final period, to secure the victory.

“In the fourth period we were finally able to hit a couple of 3-point shots that allowed us to stretch the lead out a little bit,” Mantooth said. “(Pike) fouled at the end and Chip was able to hit a few free throws toward the end to keep our lead.”

“We work hard to out rebound our opponents,” Mantooth said. “Wesley and Chip got some big rebounds down the stretch.”

The Eagles defeated Springwood School 61-39 in the first round of the tournament.

Bates once again led the charge for the Eagles with 16 points on the strength of an 8-for-9 effort from the field.

As a team, the Eagles connected on 26-of-47 attempts from the field (55.3 percent) and forced the Wildcats into 23 turnovers, while committing just 12 turnovers of its own.

Fort Dale will be back in action Dec. 27 when it takes part in the Glenwood School Border Wars Tournament. The Eagles will face Macon-East to open the tournament. The game is scheduled for a 1 p.m. start.