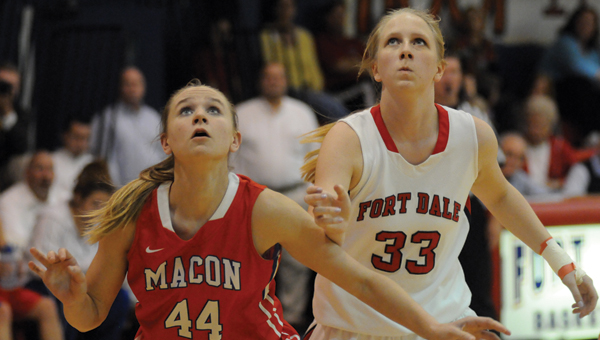 Fort Dale Academy’s Samantha Smith and Anne Matthews combined for 22 points to propel the Lady Eagles to a 45-22 win over Lowndes Academy Tuesday night in Greenville.

Smith, who entering Tuesday’s game was averaging just 1.2 points per game, was nearly perfect against the Lady Rebels. In 12 minutes of play, she connected on 4-of-5 attempts from the field and 3-of-4 attempts from the free-throw line to score a season-high 11 points. She also pulled down three rebounds and tallied four steals.

“Samantha really played hard and was productive for us,” FDA head coach Reggie Mantooth said. “She has worked hard and it was good to see her effort pay off.”

Matthews also scored 11 points to go along with her five assists and five steals.

Katie Cox, who had been averaging one point a game, scored a season-high 10 points in 22 minutes of action. She also recorded eight rebounds.

“We felt like we had a size advantage over Lowndes and Katie was able to use that advantage to score inside,” Mantooth said. “She made some good post moves and finished plays.”

Seven of the 10 Lady Eagles that played scored at least one point in the contest.

“We had a couple of players out with injury and sickness, so it gave some other girls a chance to play more and they responded,” Mantooth said. “It is always good to play a lot of players, it helps build your team and gets experience for your younger players.”

FDA (5-3) controlled the game throughout. The Lady Eagles led 12-4 after the first period of play. By halftime, they had pushed that lead to 23-7.

FDA outscored Lowndes 10-7 in the third period and 12-8 in the fourth period to seal the victory.