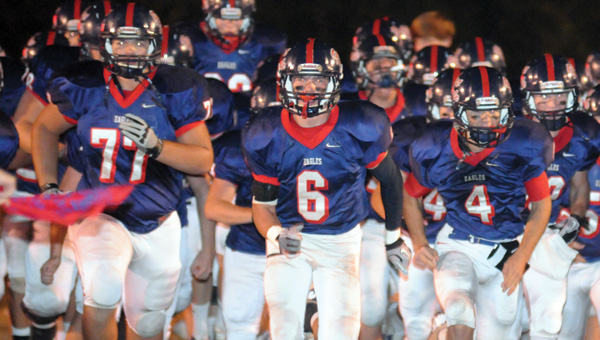 When the best of the East face off with the best of the West in the Alabama Independent School Association’s All-Star football game, Fort Dale Academy will be well represented.

Fort Dale had seven players named to the West squad, more than any other school on either squad. Tuscaloosa Academy, which eliminated the Eagles from the postseason in the second round of the playoffs, and Lee-Scott Academy had the second most players selected for the game with six. FDA head coach James “Speed” Sampley will also serve as one of the team’s coaches.

FDA senior Cade Tillery, who was named to the all-star team as a defensive back, said he believes the number of Eagles selected for the team is a reflection of the football program as a whole.

“(I think) it’s directly related to the quality of the program we have at Fort Dale,” Tillery said. “I think it’s a great honor to be named an all-star and I would like to thank Coach Speed for pushing the team like he did.”

Windham said his hope is to represent FDA well in the contest.

“It’s an honor to be recognized as an all-star, and I hope to portray the hard work and determination that Coach Speed and the coaching staff at Fort Dale has instilled in us,” he said. “The number of all-stars (from FDA) shows how dedicated the coaching staff and all of Fort Dale’s players are to making this football program a team effort.”

Gardner credited his teammates for helping the Eagles land seven players on the team.

“Every player on our team worked as hard as possible during the season to be the best that we could be,” he said. “I think this is why we had so many players chosen. It had a lot to do with work ethic.”

The game will be played Nov. 30 at Prattville’s Stanley Jenson Stadium.

“It’s something we will all remember for the rest of our lives,” Gardner said.