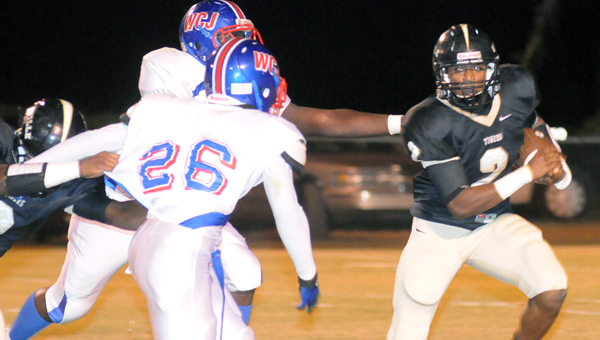 Greenville High School senior quarterback Kent Riley ran for a touchdown and threw for three more to lead the Tigers to a 27-24 victory over No. 3 Homewood High School Friday night in Homewood. (Advocate Staff/Andy Brown)

With its season on the line, Greenville High School turned to a pair of seniors.

Trailing No. 3 Homewood High School 24-20 with 11 seconds to play, senior quarterback Kent Riley tossed a fade pass to senior wide receiver Matthew Craig in the corner of the end zone for a 9-yard touchdown.

Senior Ozell Carter’s extra point sealed the Tigers’ 27-24 victory in the first round of the Alabama High School Athletic Association Class 5A playoffs.

The loss snapped a nine-game winning streak for the Patriots and gave Greenville its first win over a ranked opponent this season.

A 27-yard field goal off the foot of senior Jay Williams gave the Patriots (9-2) the first lead of the game midway through the second quarter.

The lead was short lived, however, as Riley broke free for a 17-yard touchdown scamper with 4:36 remaining in the first half. Carter added the extra point to give the Tigers a 7-3 lead.

Greenville (6-5) had a chance to carry the lead into the break, but a pair of incomplete passes forced the Tigers to punt the ball away.

Homewood took advantage of the Greenville miscues to regain the lead just before the close of the first half when senior quarterback Luke Porter found junior tight end Robert Frittro across the middle for a 33-yard score.

Junior kicker Leo Santos added the extra point to give Homewood a 10-7 lead heading into the intermission.

Following a fumble by Riley midway through the third quarter, Porter hit junior wide receiver Devonte Wallace for an 87-yard touchdown pass. Santos’ successful extra-point attempt upped the Patriots’ lead to 17-7 with 4:13 to play in the third quarter.

Later in the quarter, the Tigers took a page from the Homewood playbook, converting a turnover into points.

Greenville’s Terrail Snipes intercepted a Porter pass and returned it deep into Homewood territory. Riley then made the Patriots pay for the mistake by finding Javarris Cheatham in the end zone for the score.

Carter booted the extra point through the uprights and cut the Patriots’ lead to three points at 17-14 with 11:10 to play in the game.

Less than three minutes later the Tigers dodged a bullet when the officials awarded Greenville the ball on play in which it appeared the Tigers had fumbled it away. On the next play, Riley connected with Cheatham for a 69-yard touchdown. A missed point-after attempt kept it as a three-point game with Greenville leading 20-17 with 7:54 left to play.

With 1:20 to play, junior running back Walter Rutledge barreled his way into the end zone from three yards out for the go-ahead touchdown, but the homestanding Patriots couldn’t make the lead stand up.