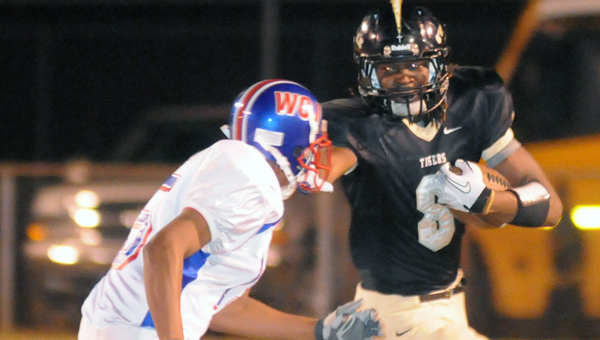 Homewood High School can be beat.

Class 6A Vestavia Hills proved that in Week 1 with a 32-17 win over the Patriots.

But Greenville High School head coach Earnest Hill made sure that his team knew few expect the fourth-ranked Patriots to lose their second game of the season this coming Friday night when the Tigers and the Patriots meet in the first round of the Alabama High School Athletic Association Class 5A playoffs.

“No one expects us to win,” Hill told his team following the Tigers’ 43-0 win over Wilcox Central High School. “Everyone expects (Homewood) to win. No one thinks we have a chance to win that game.”

No one, that is, except the Tigers and their head coach.

“We can win this game, but we have got to have a great week of practice, and we can’t get off to a slow start,” Hill said. “We’ve got to come out ready to play and play a great game.”

Since dropping its opener, Homewood has reeled off nine consecutive wins, including a 50-7 win over Class 6A Wetumpka High School and a 28-21 win over previously undefeated Benjamin Russell High School to close out the regular season.

Hill said the Patriots will challenge Greenville’s defense that has held its opponents to 13.9 points per game this season and has allowed just 25 points in its last three contests.

This season Homewood has scored more than 40 points six times, including a season-high 75 points against Ramsay High School on Sept. 21.

As good as the Patriots are on offense, they are just as good on defense. They have allowed their opponents just 12.5 points this season.

“They score about 45 a game and don’t give up many points,” Hill said. “We’ve got to go to work and get ready to play. We need to have our best game of the year Friday night. The regular season is over. We start a new season Friday night.”