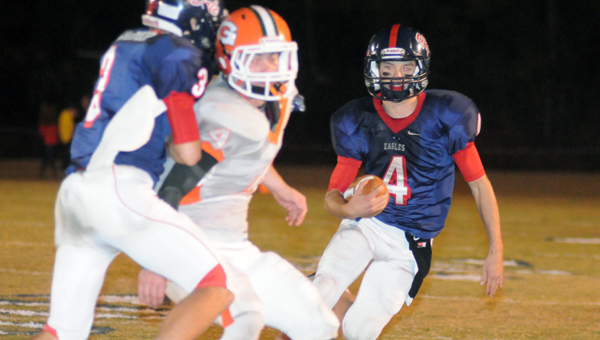 Fort Dale Academy senior wide receiver Ryan Salter hauled in six passes for 71 yards in the Eagles’ 41-38 win over Glenwood School in the first round of the AISA playoffs. Salter and the Eagles will face No. 2 Tuscaloosa Academy Friday night at 7 p.m. (Advocate Staff/Andy Brown)

Glenwood School tested No. 8 Fort Dale Academy in the first round of the AISA Class AAA playoffs.

The Eagles will get an even bigger test on Friday when they travel to Tuscaloosa to face second-ranked and undefeated Tuscaloosa Academy.

It wouldn’t be hard to prove Sampley right.

Sampley said in order for the Eagles to knock of the Knights, they will have to get off to a better start than they did against Glenwood.

“We came out a little flat,” he said. “We can’t be flat against Tuscaloosa. We need to bring it from the start. We can’t wait until the last second to start playing.”

The Eagles needed a 15-yard touchdown pass from junior quarterback Chip Taylor to senior wide receiver Dow Gardner in overtime to top the Gators and keep their hopes alive of winning a second state championship in the last three years.

“We knew it could be our last game, but we kept fighting and found a way to win,” Taylor said following the Glenwood game. “I’m proud of everyone on our team and excited that we get to keep playing.”

According to the Alabama High School Football Historical Society, the last time the two teams met on the gridiron was 1987. The Eagles won that contest 33-0.

Fort Dale (8-3) and Tuscaloosa will face off Friday at 7 p.m. in a second-round showdown at Knights Stadium.