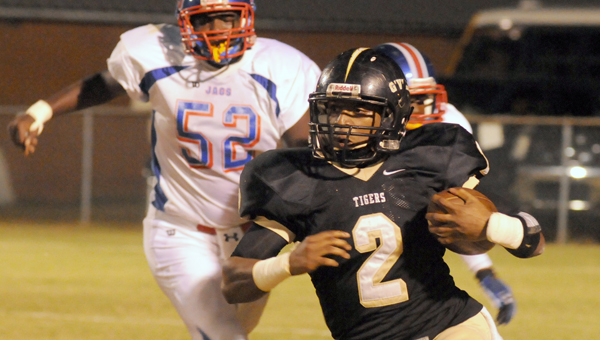 In fitting fashion, it was senior Kent Riley who scored three of the Tigers’ six touchdowns.

Riley’s touchdown toss with 29 seconds remaining in the opening half was set up by a 37-yard completion to fellow senior Matthew Craig.

While Riley took center stage on offense for the Tigers, it was senior Ozell Carter who stole the show on defense.

The 5-foot-10, 220-pound defensive lineman put the Tigers on the scoreboard early when he sacked Wilcox Central’s quarterback in the end zone for a safety just more than five minutes into the game.

Carter spent much of the night in the Jaguars’ backfield and recovered a fumble with 31 seconds left in the first quarter, which eventually led to Riley’s 1-yard touchdown run with 9:47 to play in the second quarter.

Greenville’s seniors got plenty of help from the rest of the Tigers.

Sophomore Jerome Watkins ran for scores of 1 yard and 84 yards, junior Michael Smith returned a punt 37 yards to set up a score, sophomores Zac Smith and Aquintas McDole recovered fumbles and freshman Jaquen Smith recovered a fumble in the end zone for a touchdown.

Now the Tigers will turn their attention to the postseason and their first-round showdown with No. 4 Homewood High School.

“Homewood has a good team,” Hill said. “We’ve got to go back to work and get ready to play to have a chance to win that game.”

Greenville and Homewood will face off at 7 p.m. next Friday at Waldrop Stadium.