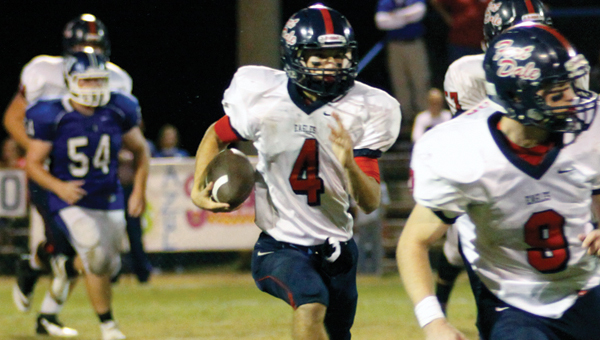 Fort Dale Academy junior quarterback Chip Taylor threw for two touchdowns and ran for another to help power No. 9 Fort Dale to a 35-14 win over Wilcox Academy Thursday night in Camden.

After a first half that saw the Eagles and the Wildcats swap touchdowns, Taylor put the Eagles on top for good with a 7-yard touchdown run with 8:16 remaining in the third quarter.

Fort Dale capped the scoring with 8:00 to play in the final quarter when Taylor found senior Taylor Windham for a 26-yard touchdown.

Fort Dale junior Chase Whiddon had a 1-yard touchdown run in the first quarter and Taylor connected with senior Ryan Salter for an 11-yard touchdown midway through the second quarter.

“We just came off an emotional loss against Edgewood last week and we were ready to play Wilcox and win,” Salter said. “We made some adjustments in the second half and put our focus where it needed to be, and did what we came here to do.”

Senior Dow Gardner recorded an interception and senior Taylor Hartley recovered a fumble. Senior Patrick Russell was 5-for-5 on point after attempts.

Fort Dale will be back in action Friday when it hosts Glenwood School in the first round of the playoffs. Kickoff is set for 7 p.m.