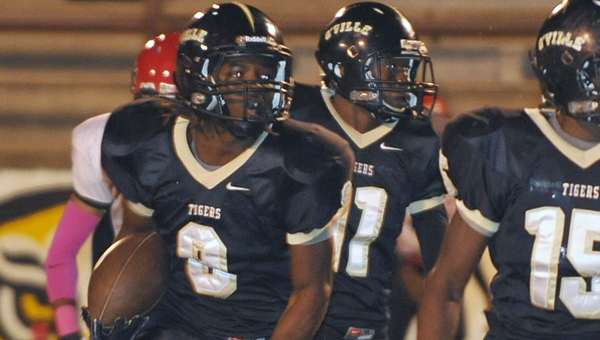 The Tigers grounded the Jaguars aerial attack, snagging three interceptions, and a spot in the postseason. With the win, Greenville earned a No. 4 seed.

The Tiger offense was firing on all cylinders as starting quarterback Kent Riley rocketed down the sideline on a 65-yard keeper on the second play from scrimmage. Riley would follow up the run with a 5-yard sprint into the end zone on the very next play, giving the Tigers their first score of the night 54 seconds into the first quarter.

Not to be outdone by the offense, the Tiger defense put the Jaguars deep into their own territory early on the next drive, forcing an interception on third-and-18 by cornerback Michael Smith who then took it to the house for a 43-yard touchdown return.

Fellow cornerback Aquintas McDole would tally a 70-yard interception return for a touchdown on the very next drive, his first of two on the night.

The Tigers had a little help from Sumter Central themselves as three costly turnovers, nine penalties and several fumbled snaps all but killed any chance the Jaguars had at stealing momentum back from a smothering Tiger defense.

Greenville led 49-0 at the half, and both teams agreed to cut the second half into two six-minute quarters as a result. The huge lead allowed for some of the younger Tigers to get some experience on the field and for Greenville to rest its starters for the playoff stretch.

“The biggest thing we try to teach is to show class and act like you’ve done it before,” said Greenville head coach Earnest Hill. “Right now, we’re treating every game like a playoff game, and we’re just trying to keep everyone showing up on Friday nights and coming to practice every day, and seeing what we can do after that.”

The Tigers face off against Wilcox Central at home next Thursday night to wrap up the regular season.