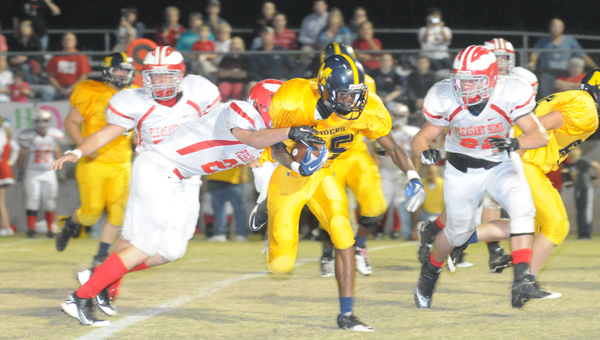 McKenzie School junior Nicarius Peterson returned a punt and a kick for a touchdown in the Tigers' 33-28 win over Pleasant Home Friday night. (Advocate Staff/Andy Brown)

The smile on McKenzie School junior Nicarius Peterson’s face said it all.

After five straight losses, the Tigers, wearing all gold uniforms for the first time this season, broke back into the win column Friday night with a 33-28 win over Pleasant Home High School on homecoming at Williams-Vickery Field.

“It feels great,” Peterson said. “This is a new team with a new mentality.”

In the days leading up to Friday’s contest, McKenzie’s coaches challenged the Tigers to play a more physical brand of football. Peterson said it paid off.

“We played physical for four quarters,” he said. “All year we’ve talked about finishing in the second half, and we didn’t execute as much as we wanted, but we got it done.”

What the Tigers did was capitalize on big plays all night.

In the first half it was sophomore Carrington Bonnick that came up big for McKenzie.

Bonnick intercepted a Pleasant Home pass with midway through the first quarter, which led to McKenzie’s first score of the night, and it was Bonnick that was on the receiving end of a 42-yard pass from Peterson that knotted the game at 8-all following a two-point conversion run by sophomore Terrance Clemons.

After the Eagles regained the lead, Bonnick made his third big play of the first half when he made a diving catch at the goal line to cap a 38-yard scoring strike from Clemons. After Clemons punched in the two-point conversion, the game was tied 16-all.

After the Tiger defense forced a three-and-out, Peterson once again came up big in the return game. This time the speedy junior ran returned the ball 50 yards for a score. Jernberg booted the kick through to give the Tigers a 30-22 lead.

Jernberg would later add a 26-yard field goal to help seal the win.

“We had to keep our pride up,” Peterson said. “We had to do this for our community.”