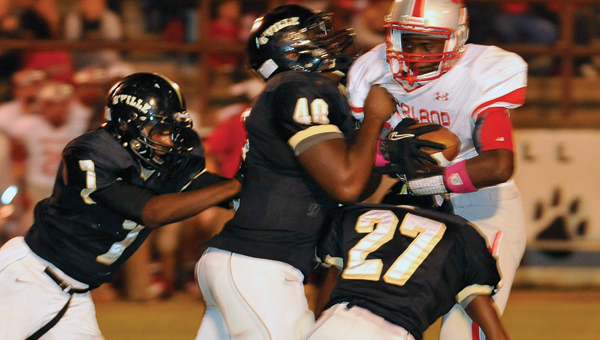 After a first half dictated mostly by a Spartan ground assault, the Tigers crept back into the game with quick pick six from Jermaine Jones and a 39-yard touchdown run courtesy of Kent Riley, giving the Tigers a 13-10 lead near the end of the third quarter.

Several stops in the backfield for the Tiger defense, with defender Marlon Davidson at the helm, gave Greenville a second shot at the end zone and a chance for a comfortable lead.

Those hopes were dashed by a momentum-changing interception in the red zone, resulting in a run-oriented, clock-eating drive led by Spartan running back Tyler Sims.

A quarterback sneak gave the Spartans a 17-13 lead and a little breathing room going into the fourth quarter.

But the biggest play of the game would come some eight minutes later, after a series of runs by Riley got the Tigers in scoring range. But on fourth down, after a botched substitution for Riley, a harassed Harper Vinson was chased out of the pocket and threw a costly interception under pressure.

“It was third-and-5 and Kent had to come out of the ball game, and that hurt us,” Hill said.  “We threw a freshman in at tailback and they knew we weren’t going to give the ball to him, and they just sniffed it out.”

Despite Riley’s admirable performance coming up short, the senior running back isn’t discouraged.

“It’s my senior year, and I’m trying to play the best for my team, the coaches and these fans,” Riley said. “I’m not going to give up. As a team, we’re going to keep moving and working hard, and we’ll come back Monday morning to get ready for next week.”