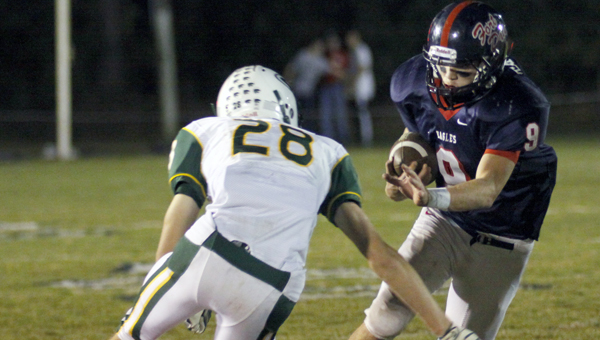 No. 9 Fort Dale Academy nearly did something Friday night that no one has done in more than two years.

The Eagles very nearly handed No. 1 Edgewood Academy a loss.

Instead, the Wildcats escaped Greenville with a 36-35 win and their perfect season in tact.

Fort Dale’s recipe for upsetting the Wildcats was simple — run the ball.

The Eagles scored all five of their touchdowns on the ground and rushed for 362 yards.

Senior kicker Patrick Russell was 5-for-5 on point after attempts.

Taylor Windham had the Eagles’ only reception of the night. It was good for 12 yards.

The Fort Dale defense was led by Ryan Taylor. He had 11 stops.

Whiddon tallied 10 tackles and senior Ryan Salter finished with 8 tackles and an interception.

Fort Dale will wrap up the regular season next Thursday when it hits the road for a showdown with Wilcox Academy.