Panthers look to make it two in a row 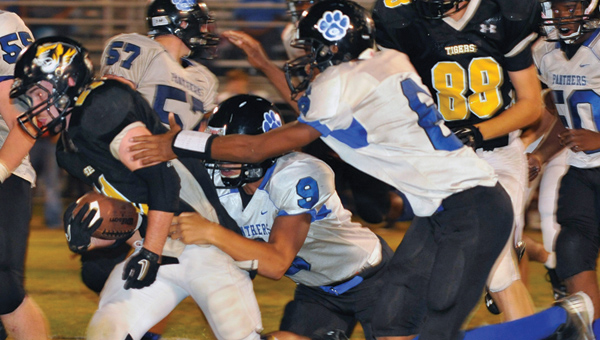 The Georgiana defense scored its first shutout since 2009 with a 41-0 win over Red Level last week. The Panthers will face Kinston High School Friday night at Harmon Field. (Photo Courtesy of Bryan Campbell)

Georgiana School will face two opponents on Friday – Kinston High School and its own homecoming festivities.

Second-year head coach David Watts said dealing with all the hoopla surrounding homecoming will be a challenge. He’s hoping his team, which is coming off its first win of the season, will be able to block out the distractions and focus on Friday’s game with Kinston.

“I have explained (to the team) that (homecoming) is for the classes coming back and the other students,” he said. “We are the main attraction and nothing ruins homecoming quicker than a poor performance by the team.”

In order to celebrate homecoming with a win, the Panthers will have to find a way to beat a surging Kinston team. The Bulldogs have won two in a row and three of their last four after starting the season 0-3.

“Kinston is well coached and very disciplined,” Watts said. “They have a good system on both sides of the ball and they execute it.”

What Kinston’s offense lacks in explosion, it makes up for in physicality. The Bulldogs average just 18.3 points per game with most of those points coming out of a run-heavy attack.

“They line up foot to foot and run right at you,” Watts said. “This year they have an improved passing game, which makes them harder to defend.”

“We played much better on defense last week,” Watts said. “I think the kids have prepared better for about three weeks now and we saw the fruits of their labors. The key now is to not forget why we have played better but continue to do the things that have helped us improve.”