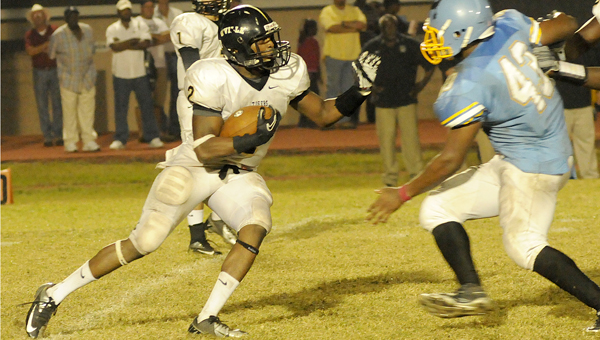 By TIM REEVES
The Selma-Times Journal

The Tigers’ Matthew Smith returned a punt 60 yards for a touchdown. On the next Selma play, Greenville’s Terrall Snipes intercepted a halfback pass, setting up a drive that would end with a touchdown run by Chris Smith.

By the time many of the fans had found their seats, Greenville was up 14-0 and Selma was looking at a long road back — a road that ultimately led to the Saints sixth straight loss on the season. Greenville won 34-6.

Selma was able to close the gap to 14-6 by halftime, thanks to a 20-yard touchdown pass from Jesse Harris to Terrell Marshell with 6:35 left to go in the second quarter.

In the second half, though, Greenville was able to roll off 20 points thanks to a brutal and relentless running attack that wore down the clock and the Selma defense. They were also helped out by a second half opening kickoff return for a touchdown by Snipes, his second return touchdown of the night.

“I told my offense we needed another 21 points in the second half, and they came close to that. I challenged the offensive line to set the tone and make their blocks, they did that as well,” Greenville head coach Earnest Hill said.

In the second half, the Tigers racked up 161 yards of rushing and another 22 through the air, while at the same time dominating the time of possession and picking up 12 first downs.

Greenville was led by senior Kent Riley, who had 161 yards rushing and three touchdowns.

The other two scores came from Snipes’ two touchdowns on special teams.