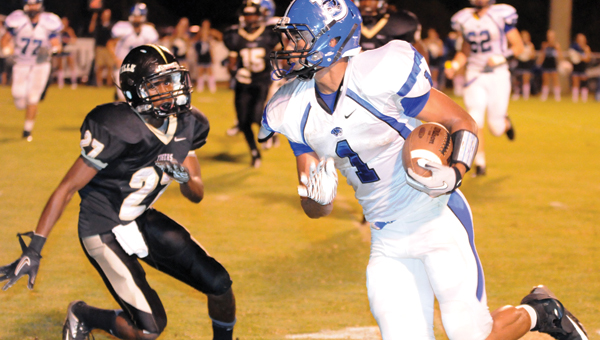 The old saying goes that it’s better to be lucky than good.

“In football you need to be lucky,” he said.

“We don’t have a bad football team. We’ve just been very unlucky. That’s the difference in last year and this year.”

A season ago, the Tigers were undefeated midway through the season thank to a forfeit by Class 6A Wetumpka High School, which had defeated the Tigers in the season opener. This season, Greenville is 2-4 and has dropped its last two games after a 21-3 loss to Class 5A, Region 3 rival Demopolis High School last week.

Hill and the Tigers will attempt to get back and track this week when they hit the road to take on region foe Selma High School.

The Saints have lost five straight after winning their opener against cross-town rival Southside.

“We aren’t out of it yet,” Hill said. “We’ve still got four more games, and I feel like we are starting to peak. We haven’t played our best football yet.”

Turnovers, penalties and blown assignments plagued the Tigers in their loss to Demopolis.

Hill said in order to defeat Selma, the Tigers must find a way to cut down on the mistakes.

“We’re shooting ourselves in the foot,” Hill said. “We’re doing some good things, and the effort is there, but we still have too many mistakes, and you’re not going to win games by turning the ball over, getting false start penalties and missing your assignments. We can’t allow those things to happen. If we get rid of those things, we’re going to win some games.”