No. 9 FDA to face defending champs 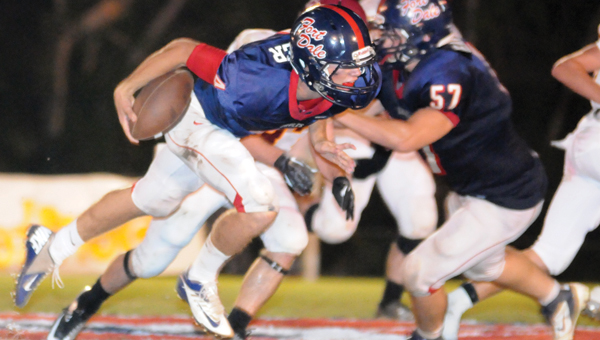 What a difference a year can make.

In 2011, Bessemer Academy ran rough shod over the Alabama Independent School Association en route to its fifth state championship since 2002.

The 2011 champions allowed just three teams to score more than nine points all season. They won six of their 13 games by more than 20 points and finished their campaign with a 12-1 record.

This season, the Rebels are 2-6 heading into Friday night’s showdown with No. 9 Fort Dale Academy (5-2, 4-1 Class AAA, Region 2) and those two wins came against Kingwood Christian and Lyman Ward Military Academy, which boasts a combined record of 3-11 this season.

The Rebels’ downfall this season has been a porous defense.

Bessemer has yielded 28 points or more in five games this season and is being outscored 217-185.

On Friday, the Rebels’ defense will be tested by a Fort Dale offense that is averaging 32.4 points per game, and has eclipsed the 35-point mark four times this season, including a 38-point performance in last week’s win over region rival Pike Liberal Arts School.

While the Rebels enter Friday’s matchup on a two-game skid, the Eagles enter the contest riding the momentum of back-to-back wins, in which their starting defense did not surrender a point.

“We changed our defense a couple of weeks ago,” FDA head coach James “Speed” Sampley said. “We moved some real athletic guys to the outside linebacker position to get some play out of them.”

Fort Dale, which trails Bessemer 6-2 in the all-time series between the teams, will look to extend its winning streak to three games when it travels to Bessemer on Friday. Kickoff is set for 7 p.m.  at Rebels Field.