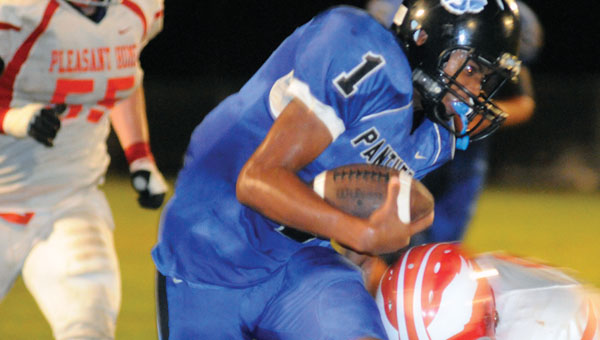 But Georgiana head coach David Watts said his team has nothing to hang its head about.

“Pleasant Home is a very physical football team,” Watts said. “Our weakness all season long has been matching people’s physicality. The thing I told them is that they played their hearts out and they have nothing to hang their heads about.”

Georgiana led 13-0 in the game’s opening quarter, but a 44-yard touchdown run by the Eagles early in the second quarter kept Georgiana from getting too comfortable.

The Panthers charged down the field and running back Carlo Mitchell ran in for a touchdown giving Georgiana a 21-8 lead after a successful two-point conversion.

After another Pleasant Home touchdown, the teams went into halftime with Georgiana leading 21-16.

However, a powerful Pleasant Home team emerged from the locker room in the third quarter ultimately taking down an exhausted Panther defense.

“We, without a doubt, played the most physical game that we have played on both sides of the ball,” Watts said. “We feel like that’s a positive for us to build on. We tackled better in the first half than we did in the second. We got tired. (Pleasant Home’s players) are huge, and we’re not.”

The Eagles came out and scored two touchdowns taking a strong lead of 38-27 lead with six minutes to play in the game.

Georgiana added one more touchdown with 1:57 left to play, but a failed onside kick gave the Eagles the ball once again.

Pleasant Home then capped the scoring with a touchdown at the 1:30 mark of the fourth quarter.

“It’s natural that they’re emotional after a game that they fought that hard in,” Watts said. “As long as they play like they did tonight, to me, the result on the scoreboard doesn’t matter.”

Georgiana (0-6) will travel to Red Level on Friday. Kickoff is set for 7 p.m.