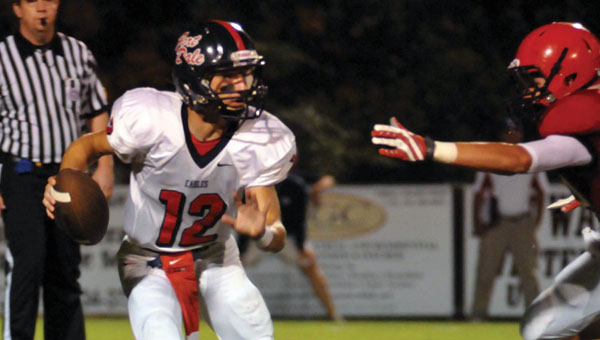 The Eagles rolled up yards seemingly at will in the first half, with touchdowns coming on drives of 68, 37 and 54 yards. FDA went back to the short, quick passing attack that it used earlier in the season, and found success early and often.

“We have been working on that quick passing game,” said FDA head coach James “Speed” Sampley. “We got away from it the last couple of weeks and it was good to see that we can still move the ball like that.”

Quarterback Chip Taylor completed 8-of-11 passes for 217 yards and two touchdowns. The scoring plays came on short passes that the receivers were able to break for long gains.

While the offense was busy scoring, the Eagle defense pitched a shutout and never allowed the Patriot offense to get rolling. The Patriots were only able to manage six first downs, and three of those came on the final drive of the game.

The Eagles were led on defense by sophomore linebacker Ryan Burkett. Burkett finished the night with five tackles, one sack and produced one of the biggest plays of the night on special teams.

Burkett settled under a Pike Liberal punt at his own 40 yard line early in the second quarter. After fielding the ball, he weaved his way to a 60 yard touchdown that put the game out of reach early on.

The lopsided affair allowed the Eagles to rest some of their starters and get some game experience for the younger players. Sampley said that being able to give his team a rest late in the season is vital to being in good position for a playoff run.

“We work the second team just as much as the starters, because you never know when the backups will become the starter,”  he said.

The win moves FDA to 5-2 and  4-1 in the region. The Eagles travel to Bessemer Academy next Friday.