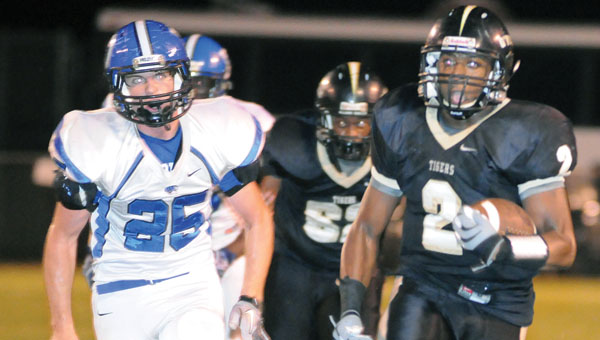 Demopolis High School has been lighting up scoreboards this season.

The seventh-ranked Tigers have scored 40 or more points in four of their six games. On Friday night, Greenville High School held the visiting Tigers to a season-low 21 points, but that wasn’t enough to earn Greenville a win as Demopolis topped the home standing Tigers 21-3.

After the game, Greenville head coach Earnest Hill wasn’t interested in claiming moral victories, but he did note the improvement he saw in his squad, which fell to 2-4 with its second straight loss.

“I’m very proud of our team,” Hill said. “The effort was there, and I believe we are peaking. We’re getting better.”

Greenville staked claim to an early lead when senior kicker Ozell Carter booted a 32-yard field goal through the uprights with 5:51 to play in the game’s opening quarter.

Those three points would be all the unit would muster as Greenville’s offense sputtered for the remainder of the contest.

“We’ve got to learn to play on every single play,” Hill said. “Every time we got something going on offense we would shoot ourselves in the foot with a penalty, a turnover or a blown assignment. It’s what we’ve been doing all year. We’re 2-4 and in our four losses no one has beat us. We’ve beaten ourselves. We played a great first quarter, and then just didn’t finish.”

Demopolis (6-0, 4-0 Class 5A, Region 3) took the lead for good in the second quarter when junior Roderick Davis plowed his way into the end zone from 3 yards out. Junior Leif Midgorden added the extra point to give Demopolis a 7-0 lead.

Demopolis’ second score came with 1:28 remaining in the first half when senior quarterback Tucker Jones hit senior wide receiver Brock Montgomery for a 10-yard touchdown. Midgorden’s extra point made it 14-3 at the intermission.

Demopolis capped the scoring with 56 second left in the third quarter when Jones scored on a 3-yard run. Midgorden completed a 3-for-3 night on extra point attempts to give the Tigers a 21-0 lead.

“We did some good things on defense, but we have got to start making plays,” Hill said. “We had a great opportunity on that last touchdown they scored to get a stop and we had a busted coverage that let them get down in scoring position. We can’t allow that to happen.”

Greenville (2-4, 2-2 Class 5A, Region 3) will be back in action next Friday when hits the road for a showdown with region rival Selma High School. Kickoff is set for 7 p.m.