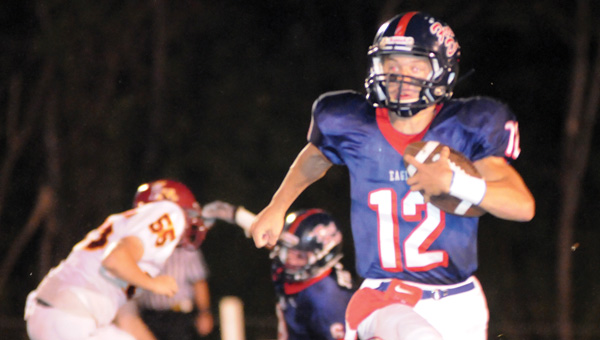 No one was happier than Fort Dale head coach James “Speed” Sampley, who battled all week to keep the Eagles focused on their game with Morgan Academy during the hoopla that surrounds the game.

Before the start of Friday’s 38-28 win over Morgan, which was the first homecoming win for the Class of 2013, Sampley had his players take part in a contact drill — something that is not normally a part of the Eagles’ pre-game routine.

“We were so brain dead from homecoming that we had have them knock around some just to wake up enough to play,” he said.

The Eagles raced out to a 35-0 lead by halftime, allowing Sampley to play reserves for the entire second half. Now the Eagles, who snapped a two-game losing streak with the win over the Senators, have shifted their attention to Class AAA, Region 2 foe Pike Liberal Arts School.

The Patriots (1-5) enter Friday’s contest on a three-game losing streak and averaging just 11.8 points per game.

But Sampley and the Eagles aren’t looking past the Patriots.

“We looked a little better (against Morgan), but we still have a long way to go,” Sampley said following the Eagles’ win. “We started out OK and we played OK there at the end of the first half, but we messed up there some in the middle. We still have a ways to go before I’d call us a good team.”